Rory, MP and Chair of the Defence Select Committee, has –  on the occasion of the 70th anniversary of the liberation of Auschwitz-Birkenau – laid out a vision of how the international community can intervene to prevent future genocides. He argues that the international community still has the skills, and the resources, to protect civilians around the world, and it needs to find the willpower and the understanding to do so.

Speaking at the signing of the Holocaust Educational Trust’s Book of Commitment, Rory paid tribute to those who were murdered during the Holocaust as well as praising the extraordinary Holocaust survivors who work tirelessly to educate young people. Tuesday 27th January marked the 70th anniversary of the liberation of the Nazi concentration and death camp at Auschwitz, the site of the largest mass murder in history.

After signing the Book of Commitment, Rory Stewart – the Chair of the Defence Committee, and ‎ a former member of the Foreign Affairs Select Committee – argued that “despite the failures of Iraq and Afghanistan, intervention can still work, and we have the capacity to prevent genocide – and we must never lose the determination to act.”

He has published his conclusions in a book, with Amnesty International, entitled “Can Intervention Work?” He said: “Having personally witnessed the pain and suffering caused by atrocities across the world – I served as a diplomat in Bosnia in the late 1990s, and in Iraq and Afghanistan subsequently – the act of signing this book today carries deep significance. We must pledge to use every political and indeed military tool to ensure that these horrors can never happen again. I encourage all constituents to mark the day and to join in the fight against prejudice and intolerance, wherever and whenever it may manifest.”

Karen Pollock MBE, Chief Executive of the Holocaust Educational Trust, said: “We are proud that Rory Stewart is supporting Holocaust Memorial Day. As we mark the 70th anniversary of the end of the Holocaust and the liberation of the concentration camps in 2015, it is vitally important that we both continue to remember and learn from the appalling events of the Holocaust – as well as ensuring that we continue to challenge anti-semitism and all forms of bigotry.” 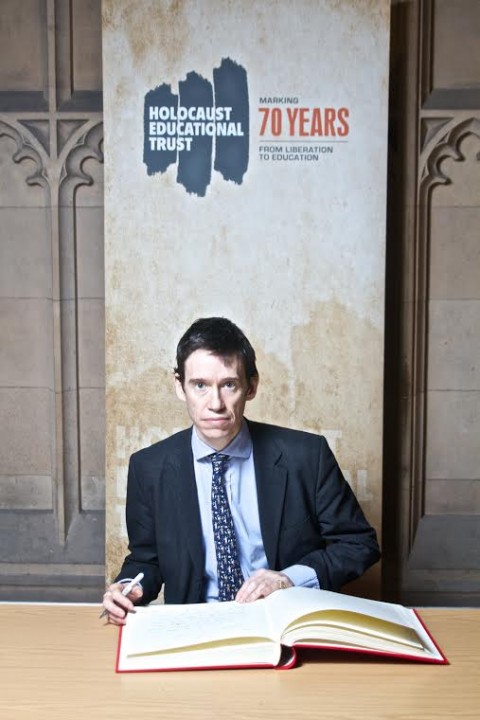