Rory has hailed the saving of Penrith cinema as a ‘triumph of community action”.

“Save Penrith Cinema” was launched in January when its owners announced that the long-established cinema was to close and be re-let in a matter of months. A vibrant campaign brought hundreds of supporters into the streets, formed a community-purchase committee and raised 120,000 pounds in two months. Rory – who has helped the community action group by personally negotiating with the owners, launching the pledge, and building a website for the campaign – heard from the vendors, Graves (Cumberland) Ltd, on Friday that they would no longer close the cinema. Instead, they have agreed a 10-year extension to the current lease.

Rory said today: “I am absolutely thrilled that the campaign to save Penrith Cinema triumphed. It is a triumph for community action. Graves have acted with generosity. A community has fought for, and saved a much-loved local asset. This is a victory for the communities of Penrith and Eden – for their determination and optimism – and an extremely well-run campaign by local volunteers. The time and energy that people have volunteered has been inspiring. I am honoured to have been able to play a small part in supporting it and I’m looking forward to many more years of film viewing at the Alhambra. This is a community asset that none of us should ever take for granted, and I couldn’t be more pleased for Penrith.”

Vince Hughes of Graves (Cumberland) Ltd, said ” Closing both Penrith Cinema and the Opera Bingo Club was never a decision we wanted to make, but after a number of years of trying to turn around the fortunes of the latter, we were forced to take the very difficult route of closure and, at the time, the most viable business opportunity was to let the building as a whole.  However, following the overwhelming campaign led by the Save Penrith Cinema Group and the community of Penrith we are now hopeful that there are other opportunities for the site and can see a future for the building which will include encompassing a cinema for a long, long time to come. ”

Ruth Parker, Chair of the ‘Save Penrith Cinema’ campaign group, said: “The Save Penrith Cinema Group are absolutely delighted with the outcome.  The people of Penrith and the Eden Valley who signed the petition, marched on the streets and pledged their money to save a cinema in the town made their voice heard and it has been listen to by Graves Cumberland Ltd who will now be working with the Save the Cinema Group to keep the cinema in the town and find an appropriate tenant for the ‘bingo’ space.  A number of people have over the past few short weeks worked very hard to persuade Graves to think again, and a huge thank you must be given to the enormous amount of work and time they have given to this campaign.  Another big thank you goes to Rory Stewart and his team who have given time, support and practical assistance in making this outcome the success it is.  Without all the help of ordinary people we would not be celebrating today, so well done to all who have been involved to achieve this fantastic result.  And lastly for the little girl who wanted to see the last Harry Potter film where she saw all the others – you will be able to now….and so will I!”

Alan Towers, the current Cinema operator, said: “I am delighted to have been contacted by Graves (Cumberland) Ltd about a new ten-year lease on Penrith’s Alhambra Cinema. The strength of feeling of local residents took me by surprise – it probably took everyone by surprise! – and the willingness of local people to demonstrate that the local population cared so much about the cinemas and wanted them to continue was quite overwhelming. Very many people who have worked very hard deserve praise for this successful outcome; from the Save The Cinema campaign team, Rory Stewart M.P. and his team, all the local people who were willing to give of their time and money to achieve a successful outcome and also Graves (Cumberland) who were willing to listen to the arguments and change their decision to benefit the local community. With all the weight and support, I hope and expect that the cinemas will remain well-loved and well-used for very many years to come!”

Rory plans to help organise a fancy-dress parade to celebrate the victory. 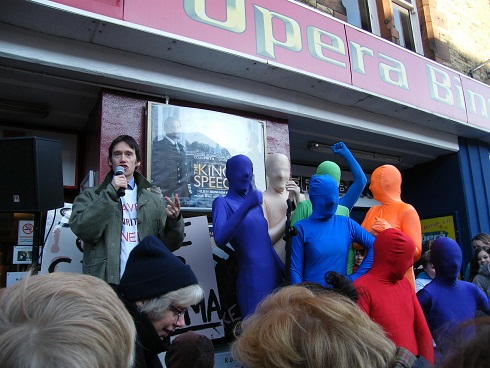