Rory launched Eden’s English Tourism Week 2012 celebrations as a guest of honour at Lowther Castle and Gardens near Penrith, one of the region’s newest tourist attractions. The Castle and Gardens, currently closed to the public but opening for two special “Daffodil Weekends“ at the end of March prior to full opening later in the year, is expected to add significantly to Penrith’s tourism income.

During his time at the attraction Rory was given a guided tour of the site by Andrew Mercer, Lowther Castle and Gardens’ Commercial Director, and assisted some of those working in the grounds. He also met with senior representatives from Eden and Cumbria’s business and tourism community including ACTion for Cumbria, Cumbria Tourism, Cumbria Chamber of Commerce, Eden District Council, Lake District Estates, Lake and The National Trust, discussing the huge range of opportunities that tourism creates in the region.

Rory said: “Tourism is vitally important to the Eden economy, and today’s event has given me greater insight into the ways in which tourism benefits Penrith and the Border. Eden receives an incredible 4 million plus visitors each year, who contribute approximately £217 million to the local economy.  The job opportunities it creates – and the more abstract investment into the long-term sustainability of our rural communities – is immensely valuable, and I am extremely proud of all those who work so hard to make Penrith and the Border such a welcoming destination that people want to return to year after year.”

The Eden launch was one of many happening all over the country, kicking off English Tourism Week from 10th – 19th March.  The week is organised by the country’s national tourism agency VisitEngland, which aims to raise the profile of tourism, estimated to be worth £97 billion nationally.

“We are delighted that Rory Stewart MP was able to show his support for English Tourism Week“ said Charles Thornton, TIC Network Manager for Eden District Council.  “The week’s national profile gives tourism destinations like ours a unique opportunity to showcase what the industry has to offer to key decision makers in both business and government circles.  Not only that, it allows businesses to showcase their products to the public and demonstrate visibly what a great tourism industry we have in the area.” 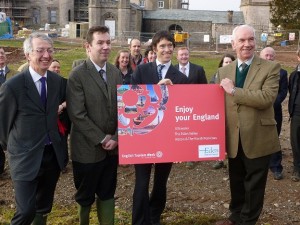