TIME TO CLEAN UP 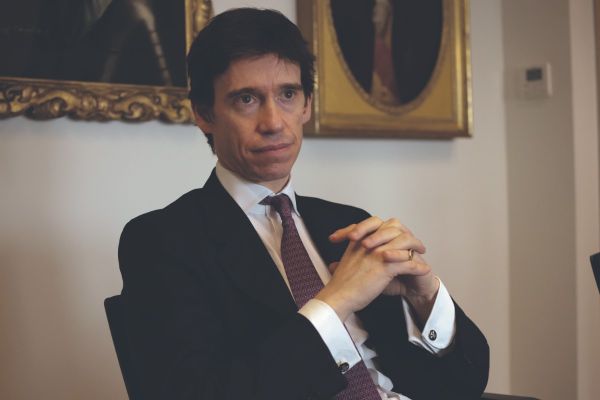 Article first published in Inside Time by Erwin James on 31 May 2018.

“What I’m trying to work out is what it is that makes one prison, for example Altcourse, work well, and another prison – not too far away – not work well,” says Prisons Minister Rory Stewart when we meet at MoJ headquarters to discuss his policies and vision for the prison system for which he now has responsibility. The Minister, formerly Minister for Africa, has perhaps one of the most colourful career paths of anyone who has ever held his current office, including a two year walking odyssey through rural districts of Pakistan, Iran, Afghanistan, India and Nepal, (a journey totalling around 6,000 miles which he began in 2000) – and a period of governance in Southern Iraq following the coalition invasion in 2003. In 2004 he was in command of his compound in Nasiriyah when it was besieged by Sadrist militia and was later awarded an OBE for his services. A best-selling author, his book about his time in Afghanistan, ‘The Places in Between’ was a New York Times best-seller described by the newspaper as a “flat-out masterpiece”. He is currently the MP for Penrith and the Border.

In the flesh he looks too young to have lived through such drama and adventure. “I’m ten years younger than my predecessor,” he says smiling. I guess it’s true what they say about getting older; policemen and government ministers all just look so young.

The first thing I want to say to him is ‘please try and sort out prison food’. While there are some establishments that provide sufficient nutrition in healthy portions, and understand the value of keeping incarcerated human beings well fed, there are many others that fail miserably in the servery department. I tell him about Lucy Vincent, a 20-something young woman who is campaigning through her website Food Behind Bars for the government to provide good nutritious meals for all prisoners, regardless of the institution. “Thank you,” he says, and notes down my comments.

“I don’t think there are any easy recipes for success. Its about relationships between prison officers and prisoners”.

Secondly, I remind him of what President of the PGA Andrea Albutt said about the outsourcing of prison maintenance contracts following the collapse of the construction company Carillion. She said the services should be handed back to the works departments so that the governor has instant control of where and what needs to be done. “But when it’s done properly there is no reason why outsourcing shouldn’t work well,” he says. “I agree with him, there were serious problems with that contract.” But I remember as a prisoner that working with a works officer was a way for prisoners to learn skills, or even utilise skills they had before coming to prison. “Sure, sure,” he says, “I’m very, very much in agreement with you there. I’m very keen to get many more prisoners employed. I was talking to a prisoner recently, a qualified electrician, and he’s very rare. He’s employed by the prison to use his skills. But so often, Governors are not taking advantage of the skills available in the prisoner population.” Would he like to see Governors actually taking advantage of the skills and abilities of prisoners in their charge? “Much more. Much more,” he says emphatically.

But traditionally, prisoners are not seen as assets. Does he want to change that? My view, from the 20 years I spent in various prisons from Cat A to Cat D is that prisons can be places where good things happen, not just places of shame and neglect. I believe a prison should be seen by society as a valuable community resource, as valuable as a hospital or a school. So why don’t we do that? I think that it’s because politicians and the media have famously used prisons and prisoners as whipping boys for the electorate. I well remember former Justice Secretary Chris Grayling announcing when he took on the role that prisons under his watch were, “no longer going to be Holiday Camps.” One of the most disingenuous utterances from someone in his position that I could remember.

“A prison is a very, very challenging environment,” he says. “You can see prisons going in three years from good prisons to bad prisons, then from bad prisons to good prisons. A lot of it seems to be about detailed leadership. I don’t think there are any easy recipes for success. It’s about relationships between prison officers and prisoners. It’s a lot about how the custody managers work, the way the POs work, the way that young prison officers engage with prisoners.”

Don’t prison officers deserve more respect from society for the work they do? Why shouldn’t officers have similar cultural and educational opportunities that many of our prisons offer prisoners? Are there any plans to enhance the work of prison officers? “Yes, I am interested in that,” he says, “but I’m also taken back a step. We have to make sure before we start talking about Art groups that prisoners are unlocked and able to get safely from their cells to that Art group. One of the things that frustrates me is that we talk about these wonderful things that might be on offer, but if the prison is filthy, violent, drug infested, out of control – you can’t get to any of those opportunities. Unless you get those basic things sorted – are the cells clean, are the yards clean, are people out of their cells enough – and getting them out of their cells enough also means do the prison officers feel safe? I think we need to get a much clearer set of basic uniform standards right the way across the estate.”

Is it about pride? Should we feel pride in our prisons? “Part of this is about who we are,” he says. “Do we feel proud of our prisons? Is this somewhere I’d be happy to be? You have to find a way of having a very difficult conversation with ourselves and with the public, about helping people understand what a prison is; that it’s doing a lot of different things – it’s punishing people, deterring people, it’s reforming people, educating people. And the really great prison officers manage to find a very practical way of doing these very different things.”

I asked him if he was aware of the Unlocked Graduate programme, whereby students from universities enrol for a couple of years as prison officers as part of their social responsibility development – an idea championed by educationalist Dame Sally Coates. “Yes,” he says, “I think they’re terrific. I’m very much a fan.”

So how do we convince the public that prisons are places where we should expect good things to happen? “For me, I don’t think it’s about having one or two shiny ideas,” he says. “You’ve got to have a system that works across the board. One of the things I’m interested in is what can we do to get a bit of consistency – some sense that you can expect the same basic things whichever prison you are in…

What about the drug problem? Isn’t it time to face up to the fact that when a prisoner is found to have five kilos of ‘Spice’ in his cell or, as in HMP Hewell recently, a ‘brick of heroin’ – that this quantity of drugs has not been smuggled through the visits room? “By and large our prison officers are very professional and honest people, but there will of course, in any organisation, always be bad apples. And one of the things that I am very keen to do is to make sure that it is much more difficult for anybody – prisoner, family or prison officer, to bring illegal substances into prisons. One of the ways I plan to do that is by ramping up our gate security. Scanners, sniffer dogs and more routine searching of everyone who comes through the gate. I’ve spoken to the Prison Officers Association about that and they are quite comfortable with it. They also agree that they are not in the business of protecting people bringing in kilos of heroin.”

“One of the things I’m interested in is what can we do to get a bit of consistency, some sense that you can expect the same basic things whichever prison you are in”.

Stewart was speaking to me ahead of the announcement of the new education and employment strategy for prisoners. “One of the ways we think will be helpful is that we are going to radically improve the way we assess prisoners on arrival and make sure that they have, alongside their sentencing plan, a very clear education plan, for each individual, taking into account their educational needs, and planning out what they want to achieve during their time in prison. What can we do in relation to training to make it easier for you to become what it is you want to be when you leave prison. We will provide national standard examinations. We have very good evidence that we can reduce the reoffending rate dramatically if we can get people into skill building and education and into employment.”

The week before, he says he had a group of leading businessmen and CEOs around his table, including James Timpson. “They talked through what they need, what they are looking for and it was very interesting. Some of what they want is formal stuff, English language etc. but some of it was softer skills. Can you stand for eight hours behind a Timpson’s counter dealing with the public?”

‘Compared to wallowing in the mire of wasted time and chaos that defines much of our prison system’, I said – that sounds like absolute luxury.