Rory Stewart is inviting all to join him on Monday 28th July in welcoming Sir Ranulph Fiennes and some great British climbers, from Alan Hinkes OBE to Doug Scott OBE, to help build the Auld Acquaintance Cairn at Gretna. People are invited to muster from the morning, with Sir Ranulph joining in the afternoon.

Rory Stewart said: “Please bring your own stones and gloves if you have them – if not we have them on site – and be ready for action! Sir Ranulph, the first man to have crossed both polar ice-caps and climb to the summit of Mount Everest (aged 64) is ‘putting his muscle into the cairn’ to show his commitment to the UK. All ages and nationalities are invited. Sir Ranulph will be bringing his stone from Exmoor, but there are also stones on site from around the UK. The climbers and explorers will be making a brief speech shortly after 4pm and would be delighted to chat to any volunteers on site.”Sir Ranulph Fiennes’ father was killed commanding the Scots Greys during the Second World War and he himself served in the Scots Greys before joining the SAS. The experience of serving alongside Scottish soldiers has left him with a deep respect and affection for Scotland and its place in the United Kingdom.

The Auld Acquaintance Cairn is behind the ‘First House in Scotland’ toll-house at Gretna (just south of the Gretna Gateway). Directions can be found at www.handsacrosstheborder.co.uk. 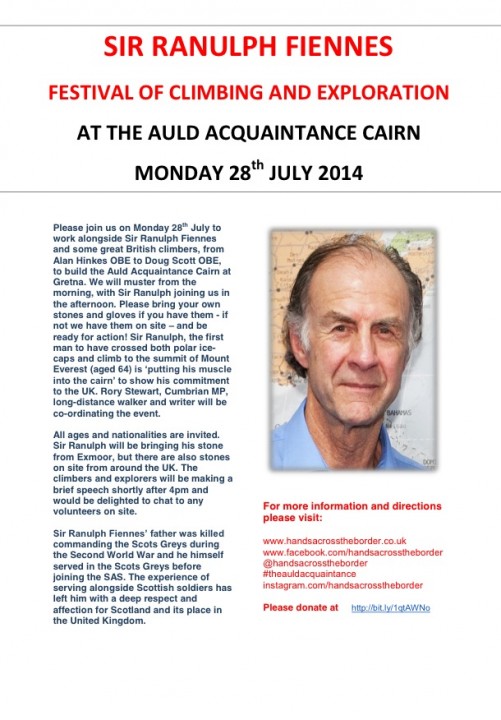