Rory paid a visit to Penrith’s Devonshire Arcade, where national organisation ‘somewhereto_’ – a youth charity launched in association with the London 2012 Games and Channel 4 Education – had taken over the historic retail space in order to provide an environment for young people aged 16 – 25 to fulfil their creative ambitions doing the things they love within the fields of arts, culture and sports. Rory joined a group of young constituents involved in the performing arts, and chatted with them as they rehearsed in the town centre space.

‘somewhereto_’ has been opening up spaces within busy town centres nationally following their first successful venture in Blackburn Town Centre last year, and has been working closely with local organisations, partners and agencies within the Carlisle and Penrith area prior to taking over the empty retail units in the Devonshire Arcade.

Rory said: “It was a real pleasure to visit this project and welcome somewhereto_ to Penrith. It is such a simple yet effective idea to occupy an unused town centre hub as a space for young people to express themselves creatively, bringing them into the heart of their local community and giving them space and freedom. I would love to see more projects like this in our town centres, and hope that this is a precursor to other, similar, initiatives that open up much needed resources and inspire young people at the same time.”

Rob Howell of somewhereto_ said: “We’ve worked in partnership with Eden Arts and the management company for the Devonshire Arcade on this event. The Carlisle Youth Zone have been really active as has CLIP.  We’ve also been working Sound Bites Music Store in Penrith. We are delighted to have Rory’s support, and to know that he is committed to improving opportunities for his young constituents in an imaginative way.” 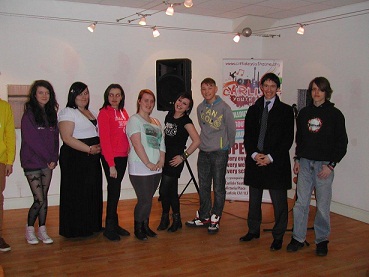