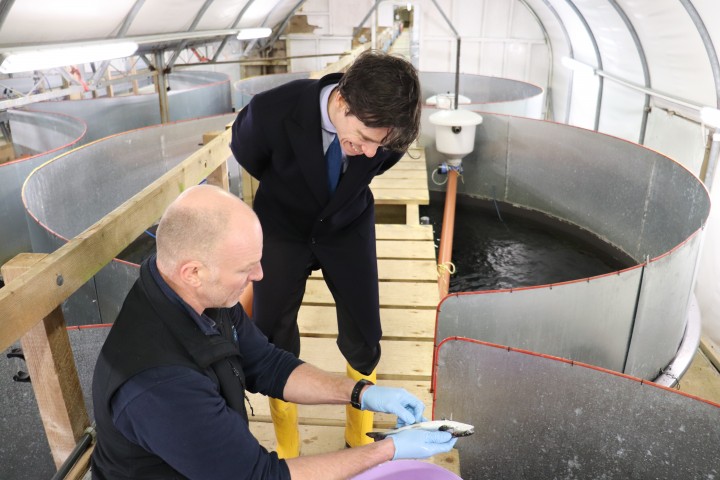 Rory met with staff from Cooke Aquaculture to celebrate the launch of the Burn Banks site’s new permit limits and Environmental Management System.

He was given a tour of the premises at the foot of Haweswater dam and shown several of the 220,000 juvenile salmon, which had grown up on site. Salmon grow in freshwater released from Haweswater in pools at the Burn Banks site until they reach a size where they can be sent to sea and grow into mature salmon. The sale of the mature fish from Cooke’s UK operations net the UK £88million a year in exports, with sales predominantly to the EU, USA and China.

In order to secure the site’s future, a new Environment Agency permit was required. After 10 years of biological and water quality monitoring of the local beck, the limits required to secure the site’s long term future were finally agreed with the Environment Agency and the site’s consultants, Peak Associates, who are based at Lancaster University, in January 2019. Cooke Aquaculture will now continue working with Lancaster University’s experts in water quality to make sure that any impact from the site remains within acceptable limits. Ensuring the site remains within sustainable limits will be key for the next 10 years as issues can be caused downstream when too many nutrients go into upland becks.

Nick Smith, Site Manager at Burn Banks Smolt Unit, and Mike Matthews, Managing Director of Peak Associates, thanked Rory for taking time during the early stages of the review to make sure Cooke Aquaculture, the Environment Agency and Natural England understood the need to achieve a balance between protecting the environment and ensuring export led businesses like Cooke can thrive in rural communities. After over 12 months of negotiation all parties were eventually happy with the new limits and agreed that this balance had been achieved.

After the visit, Rory said: “It was fascinating to visit the Cooke Aquaculture site at the foot of Haweswater and find out more about how they rear salmon. I was really impressed by the operation and the professionalism of staff at the site. I’m very glad that a balance was found which both protects the environment and business so that the new permit limits could be agreed.  This is a great example of how a business in my constituency is having an impact on an international stage.”