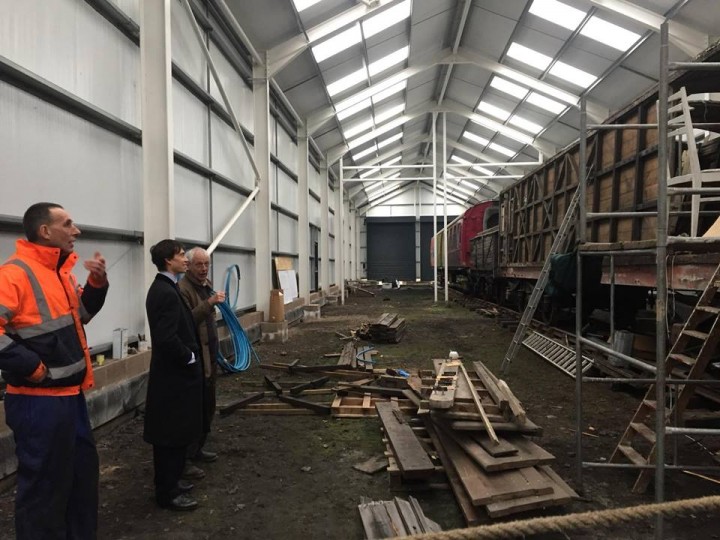 Rory visited the Stainmore Railway Company at Kirkby Stephen East to hear an update on their work and to meet their volunteers.

The Stainmore Railway Company came into being in 1997, following the purchase of the Kirkby Stephen East station site by Stainmore Properties Ltd. in order to build and develop a Heritage Centre and operational railway. Since then, millions have been invested and around 40 volunteers, from all across the area, have come together to work to restore carriages. A new shed has been built with a legacy, while steam and diesel locomotives, alongside Gresley Coaches and Carriages and Wagons, have been restored.

Mr Stewart toured the site with a great deal of interest, stopping to admire vehicles being stripped down and fitted with new wood panels. He also studied the exhibits and spoke to many of the volunteers, asking them about their work, how long they had been with the project and about visitor numbers. Rory takes a keen interest in such projects, which include the Solway Aviation Museum, and regularly champions their cause in Westminster.

Rory commented: “It was a very great pleasure to tour the Stainmore Railway Company and to get a glimpse of the incredible volunteer culture which extends all the way through Cumbria. Teams of dedicated individuals, such as those I was privileged to meet, give their time and effort to carefully restore different parts of our industrial, train and aviation history, and we owe them a debt of gratitude for this. The venues that they help to create not only bring in tourists but also stand as a powerful example of community and commitment”.