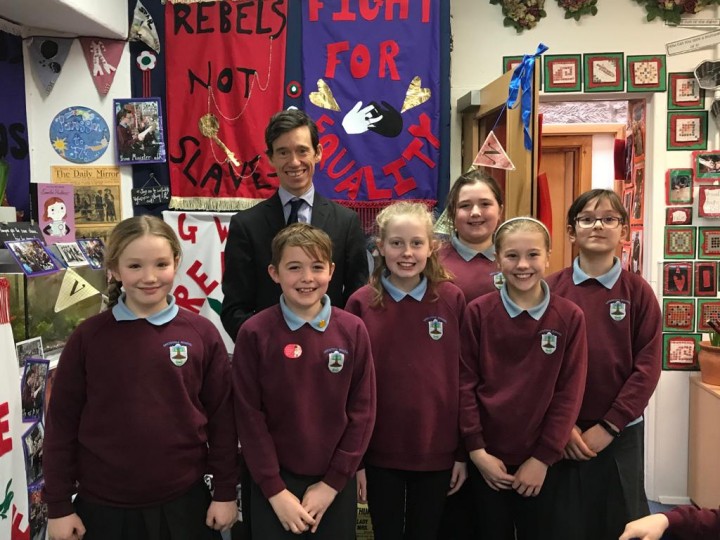 Rory visited Greystoke Primary School to speak to the children about his work as their MP.

Like many schools across the country, Greystoke Primary School celebrated Parliament Week from 12-18 November 2018, with a series of talks, lessons and trips. The children visited their local polling station, studied the history of Parliament and learnt about the constitution. On 2nd November they visited the Palace of Westminster, touring the House of Lords, the House of Commons and many of the buildings’ most notable features. They were particularly interested to see those sites associated with Guy Fawkes, whose attempt to blow up the old Palace of Westminster is commemorated around the building. This year, a trip to the Scottish Parliament at Holyrood House is being planned.

During Parliament Week, Rory sent the children a video, shot outside Parliament, discussing the strengths and problems of democracies and, as a result, the children had a great many questions for him when he visited. Accompanied by Donna Brolly, he was shown around the school before sitting down with the students. They asked him about Parliament, what it is like to be an MP, how he became an MP and his work both in Cumbria and in his capacity as Minister for Prisons.

Commenting on his trip, Rory said: “It was a very great pleasure to return to Greystoke Primary School and to spend so long speaking to the children. Their knowledge of parliament and its history is outstanding and a real credit to Donna, who has worked so hard and so successfully to make them aware of their rights and responsibilities as citizens. I was very impressed by the questions they asked, which were both thoughtful and difficult, and I hope that other schools follow Greystoke’s successful example and celebrate Parliament Week in 2019”.