Local MP and anti-wind turbine activist Rory Stewart on Saturday joined locals and representatives of a number of North Cumbrian anti-wind turbine groups at a public meeting in Armathwaite, to reinforce his support in fighting commercial wind turbine developments in the Eden Valley and along the A6/M6 corridor and to propose that minimum distance legislation be adopted by all planning authorities in Cumbria. The event was part of the MP’s ongoing campaign to ensure that Cumbria remains free of inappropriate wind-turbine developments, and follows his recent lobbying of local authorities to adopt the essential features of the Wind Turbines (Minimum Distance from Residential Premises) Bill which was formerly being carried through the House of Lords by sponsor Lord Reay until his death in 2013.

Rory joined other activists as he spoke at the packed meeting, largely centred around the local campaign of the NO2AWT group which is opposing the siting of a 250ft commercial wind turbine on the side of local landmark Barrock Fell. Groups from across Eden, Allerdale and the Carlisle region joined the meeting, attended by dozens of campaigners.

Speaking at the event Rory said: “We are all here because we form the heart of a groundswell of public opposition to this application, and so many like it. People don’t visit Cumbria for the weather, or the food; they visit for our landscape. The main pillar of our economy is tourism, and the Eden Valley is one of the most spectacular and unspoilt regions in the country. The Aiketgate area would be ruined by a large industrial structure seen by every single tourist approaching the Eden Valley as they travel north up the M6 and A6. Today we can clearly see how strongly local communities feel about protecting their local landscape, and not only for their own benefit: but for the benefit of all who visit Cumbria precisely to see and enjoy our beautiful countryside. Such wind farms affect us all, and I am so pleased that so many people gave up time on their Saturday to show how very concerned they are.”

The campaign, run from the small hamlet of Aiketgate, already has over 100 supporters, all with serious concerns about the proposal, which threatens a towering turbine over the village, visible for miles in every direction. The local community fears that were it approved, not only would the visual intrusion, flicker effect and noise ruin life in the village, but it could also lead to the construction of many more turbines in the area.

The Group Chairman of NO2AWT Alan Daltrey said: “Today has been a great opportunity for everyone to pull together to stop the significant detrimental impact that turbines will have on our landscape, villages, homes, health and economy. We are small rural communities that greedy developers see as easy targets. If we support each other, we can gain the numbers we need to oppose these scatter-gun planning applications that are purely about profit, not sustainable renewable energy.”

NO2AWT’s Secretary and Aiketgate resident Jan Whitfield said: “We were thrilled that Rory attended our event, and give our full backing to his campaign for minimum setback distances. If Rory’s bill is passed, developments in such close proximity to homes, like that planned for Aiketgate, would not even be allowed to reach the planning stage. This is much needed protection for families and homes.”

“More and more of us know of friends or family members whose homes and villages are under threat from turbine development, or, like us, are finding their own property and wellbeing at risk. Local residents have to act, and now is the time. If we do nothing, we can’t complain when these monstrous structures disrupt our lives and ruin our local landscape.” 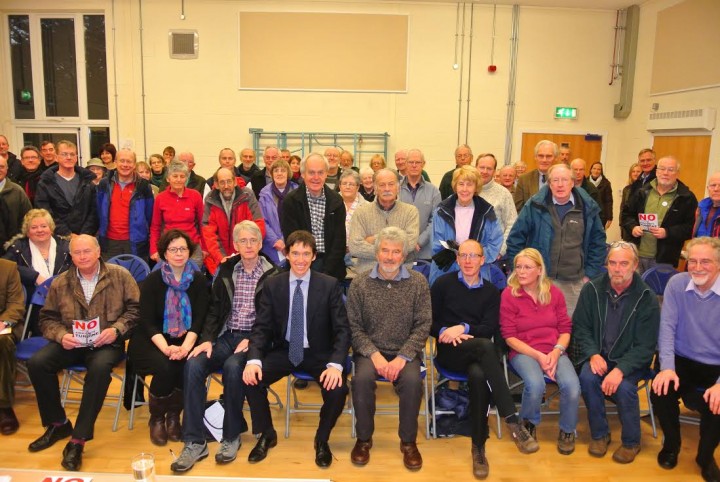