Andrew Northcott of CAfS demonstrated the professionally fitted energy saving improvements and how they help reduce heat loss and can save over £100 on bills, as well as reduce carbon emissions. Mrs Scott’s home is one of over 180 homes that have benefited across Eden District as part of a Big Lottery Funded project called ‘Sustain Eden’.

Front and back doors had seals fitted and a special letter box cover was installed to keep out cold draughts. An electricity monitor was also included. Mrs Scott was very pleased with the service from CAfS and said the draught proofing had “…made a big difference in keeping my home warm”. Rory Stewart commented “We’re fortunate having local charity CAfS here doing so much to help vulnerable people improve their living conditions and reduce costs.”

During the visit the team at CAfS also helped Mrs Scott by checking her energy tariff and found a massive saving by switching from a standard tariff with Eon to one of the smaller suppliers. Andrew said “Mrs Scott spends a large proportion of her income on fuel and as she heats her home with electricity the savings by switching are significant. For many people heating with electricity the yearly savings can exceed £500 and can be sorted by telephone to a comparison company.”

Rory Stewart said: “I have wanted to see an example of CAFS’ draught proofing programme for some time, and was glad to be able to visit Mrs Scott on King Street to see the technology in action. It’s great that such a relatively straightforward and simple measure can have such positive effects, and without impacting on the extraordinary built heritage of a house like this. CAfS are doing brilliant work at making a tangible difference to households in the area, as well as advocating for sustainable, environmentally solutions that work.”

CAfS are now setting up a network of Energy Champions who can help vulnerable people to get warmer and bring environmental benefits and reduces fuel bills. Energy Champions would spend about two hours a month to talk with people locally, including helping individuals on a one to one basis. No specific skills or knowledge of household energy is required, though experience dealing with household energy bills would certainly help. This opportunity would ideally suit someone who is already, or would like to be, active in their community. Anyone wanting more information can call CAfS on 01768 210276 or e-mail [email protected] cafs.org.uk. 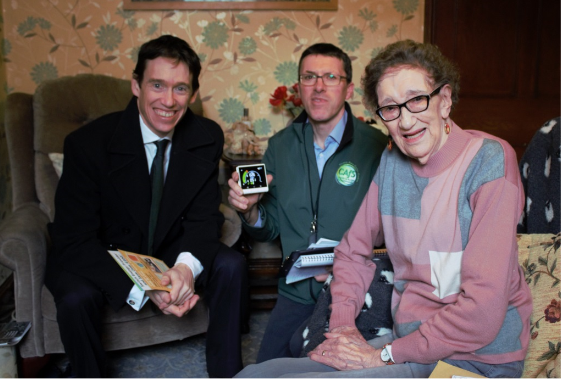