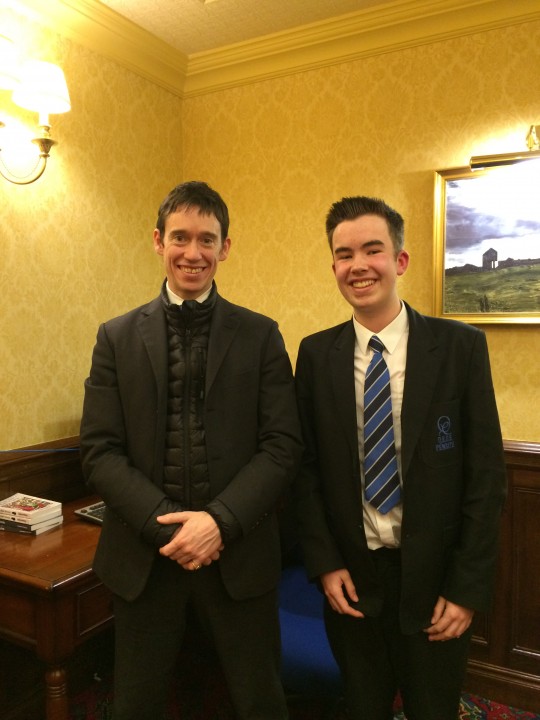 Rory Stewart MP on Friday met with Jacob Reid, Member of Youth Parliament (MYP) for Carlisle and Eden, to discuss the role of the Youth Parliament, the issues facing young people in Penrith and The Border, and to establish a strong working relationship together.

Jacob  – a 14-year-old pupil at Queen Elizabeth Grammar School – was elected as a MYP last May, triumphing in a closely fought seven-way election. The UK Youth Parliament consists of 364 MYPs all of whom are aged 11-18. It provides opportunities for young people to use their elected voice to bring about social change through meaningful representation and campaigning. Once elected, MYPs organise projects and events, run campaigns, and influence decision-makers on the issues that matter most to the UK Youth.

Rory was keen to meet with Jacob, and together they discussed a range of issues – from votes at sixteen, to Jacob’s priority as a MYP, which is tackling mental health. He allowed Jacob to shadow him at his Penrith “surgery” and has committed to meeting him regularly to keep him involved in parliamentary work.

Speaking about the meeting Rory Stewart said: “Jacob is an impressive young man, and has provided me with a fascinating insight into the work of the Youth Parliament, and I was keen to see how similar our roles were as elected politicians. The work of Jacob and his colleagues is invaluable to getting the views of young constituents heard and I look forward to working him over the coming year.”

Jacob Reid said: “Yesterday I had the privilege of meeting our MP for Penrith and The Border, Rory Stewart, at one of his Constituency clinics. Being our first meeting, we discussed the UK Youth Parliament and its workings generally, as well as mechanics behind Make Your Mark; we also grilled each other over Votes at 16 – the UKYP’s National Campaign – and Stop Cuts Affecting the NHS, Eden Youth Parliament’s new campaign. Rory was engaged, interested, enthusiastic; and having arranged regular quarterly meetings here on in, I very much look forward to developing our seemingly promising working relationship in the future and being able to stand up for the wishes and views of young people in Eden.”