At an open meeting in Castle Carrock this weekend, Rory rallied together residents, encouraging them to demonstrate against the recent decision to demolish an iconic 18th century building – The Weary – which forms an integral part of the village’s charm and character.
Councillors last week approved the decision to demolish The Weary – which has lain dormant as a pub since 2011 – and to replace it with three town houses, which have been described as “totally inappropriate” and “out of keeping with the rest of the village”. The move has angered the local community, and goes against the express wish of the Parish Council, who have again written to Carlisle City Council expressing their dismay at the decision.
Residents used Rory’s visit to Castle Carrock as an opportunity to voice their frustration with the council’s decision, and the Rory agreed to put his full weight behind the campaign to save the building. Rory has asked the community to begin gathering a petition that will highlight the scale of local opposition to the plan, and he agreed to investigate how a community’s ‘Right to Buy’ applies in this instance. Rory has also written to owner of the property, Mr Alan Sykes, to ascertain whether he would be willing to sell to the property to the community, if necessary.
Rory said: “It strikes me as very sad that the community’s express concerns have been ignored in this instance. Castle Carrock has already shown it is willing to be flexible, and recognised the need for a change in use from pub to holiday accommodation. Where their flexibility stops however, is the point at which you decide to tear down an iconic building which has lain at the heart of the village for the past 300 years, and replace it with wholly inappropriate town housing.”
“This project has no local support, and I am determined to do all I can to see The Weary preserved the way it is. This is exactly the sort of thing that local Neighbourbood Plans can safeguard against, and this is why I am so keen to see other communities replicate Upper Eden’s recent success, and bring control over the nature of their locality back into their own hands.”
Parish Councillor Dave Hassall said: “If we can achieve what has been suggested by Rory then we will have the full parish’s support behind us. The Weary holds a central position in the village, its been here for 300 years, and as a focal point, it would be a disaster to see it torn down. It has the potential to be turned into a real asset for the village, providing its essential character is retained.” 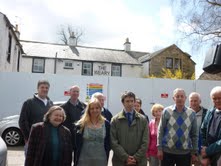