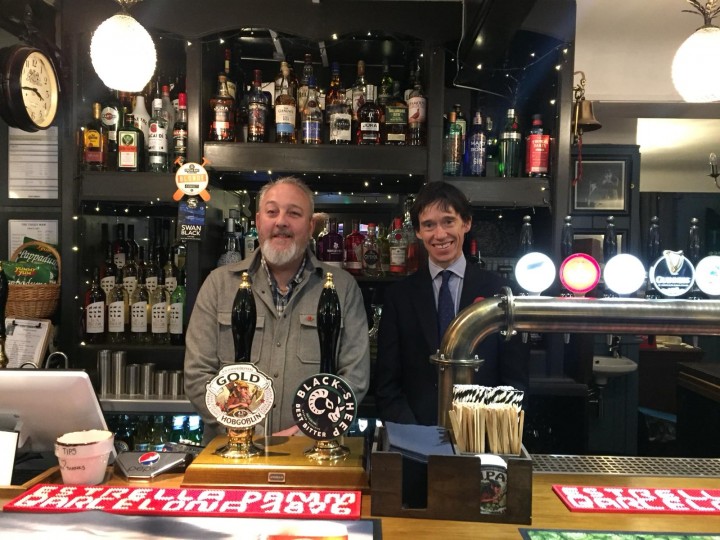 Rory has praised the pub trade on a recent visit to the newly opened ‘Taggy Man’.

Mr Stewart was toured around the pub by husband and wife team, Kevin and Jennifer Oates, who chatted to him about the its renovation and their love for Kirkby Stephen and the Eden Valley. The three also discussed the pub’s namesake, a local character from folklore, who was said to capture those children who chose to stay out after the ‘taggy’ (curfew) bell had rung in the evening.

Mr Stewart has, since his election in 2010, taken a close interest in the pub trade in recognition of the important role that it plays in community life – both as a source of enterprise and as a vehicle for community action. As pubs across the UK close, Penrith and The Border’s have pioneered imaginative and innovative approaches to ensure their survival. In Hesket Newmarket the first community-owned pub in Britain was established, a model that was followed in Crosby Ravensworth with the community buy-out of the Butchers Arms (the bar of which the then Prime Minister, David Cameron, opened). Mr Stewart has shares in the Butchers Arms and has been involved in helping the George and Dragon in Garrigill, the Chamley Arms in Warcop, and the Strickland Arms in Great Strickland.

Following his visit Mr Stewart said “I am delighted that pubs continue to go from strength to strength in Penrith and The Border, bucking the national trend, and it was a very great pleasure to visit this beautiful new example in Kirkby Stephen. Kevin and Jennifer have done a fantastic job in restoring the Taggy Man and I am very grateful to them for showing me around. Our pubs are of huge importance to our constituency and our communities, and we need to do more to support them.”