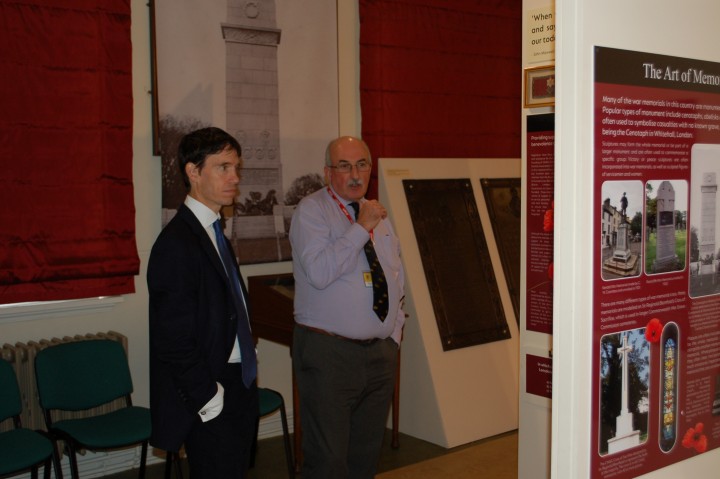 Rory visited Cumbria’s Museum of Military Life in Carlisle Castle to tour the ‘Lest We Forget’ exhibition and learn more about Cumbria’s military history.

Mr Stewart met with Stuart Eastwood, the curator, and the two toured the Museum together. Rory was shown around the permanent collection, which features items spanning three centuries. Many of them were donated by Cumbrians and include regimental badges, medals, uniforms, portraits, weapons and photographs. Mr Stewart was then shown the ‘Lest We Forget’ exhibition, which focuses on the act of remembrance, its origins and its transformation over the years since the First World War. The two discussed the exhibits and the commemoration of remembrance. As they left, Rory wrote a message in the visitors’ book.

Mr Stewart, who held a short limited commission in the Black Watch and has a longstanding interest in military history, was very taken with the displays and commended Mr Eastwood on the museum’s work in educating new generations about the sacrifices of their predecessors.

Cumbria’s Museum of Military Life has been in Carlisle Castle since 1932 and in its present location in Alma Block since 2014. This location has sufficient space for both the display of the Museum’s extensive permanent collection and for the staging of temporary exhibitions. ‘Lest We Forget’ is the latest of these, many of which have focused on foreign campaigns in which Cumbrians have fought.

Commenting on his visit, Mr Stewart said “It was wonderful to visit the Museum of Military Life and see their latest exhibition, which is well worth a visit. Institutions such as these are vital for reminding us all of Cumbria’s proud military history and heritage. ‘Lest We Forget’ was most thought provoking and I very much look forward to returning in due course. I would like to thank Stuart and all the staff for all that they do”.