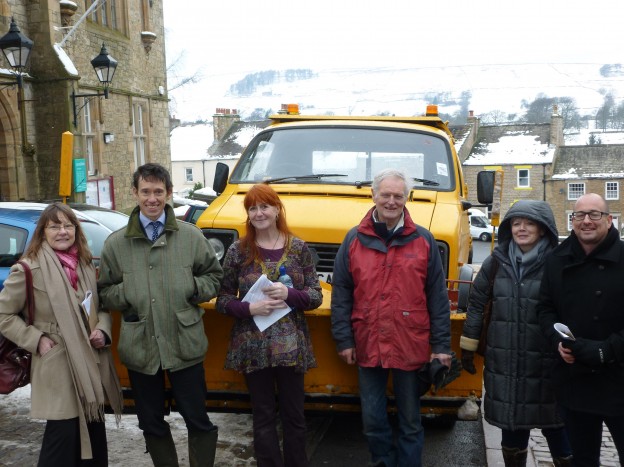 Rory braved the bad weather to visit Alston – recently crowned the UK’s first ever Social Enterprise Town – to discuss with local community representatives and officials from the Department of Communities and Local Government how the area can continue to build on the success of recent community-led projects.

The local MP and DCLG officials had a chance to meet with a range of the social enterprises which deliver services in retail, broadband, transport and leisure that would otherwise not be available to local people. This included representatives from Cybermoor, the community owned broadband co-operative, the local parish church looking to regenerate and renovate the building, and the newly discovered Epiacum Roman Fort, which hopes to become a major tourist attraction over the next few years. An open discussion was set up in the afternoon where residents then had the chance to discuss the structures and projects that could be put in place to further strengthen Alston’s future.

In addition to this, the local MP and DCLG officials also met the team that run the community-owned snow-plough which was in high demand over the weekend. Concerns have been raised about plans to relocate the satellite Highways Maintenance service in Alston to a central depot in Penrith to reduce costs. As much of the Alston community is dependent upon good road access, from the local school, to the voluntary ambulance and fire services, it is feared that a loss of the local Highway Maintenance team could have serious consequences on the community’s capacity to function. Rory Stewart has written to Cumbria County Council urging them to reconsider their proposals and to safeguard the vital community asset.

“Alston Moor faces some of the most extreme challenges of any community in England. Many of these challenges are beyond the comprehension of officials in London, and even those in Carlisle and Penrith. Time and again Alston has had to find its own solutions, doing things government could never do, and its title of “UK Social Enterprise Town” is testament to this.

There has been a raft of new legislation allowing local communities to take control – such as the Neighbourhood Plan being championed in Upper Eden – and it is important local communities are made aware of this. Alston will always know more and care more about the problems it faces and the solutions that will work – the challenge is to ensure the community is made aware of the tools available to them to bring about such change. I have agreed to work closely with Alston to make sure this happens, and extend the offer to any other local community unsure of the next step.”