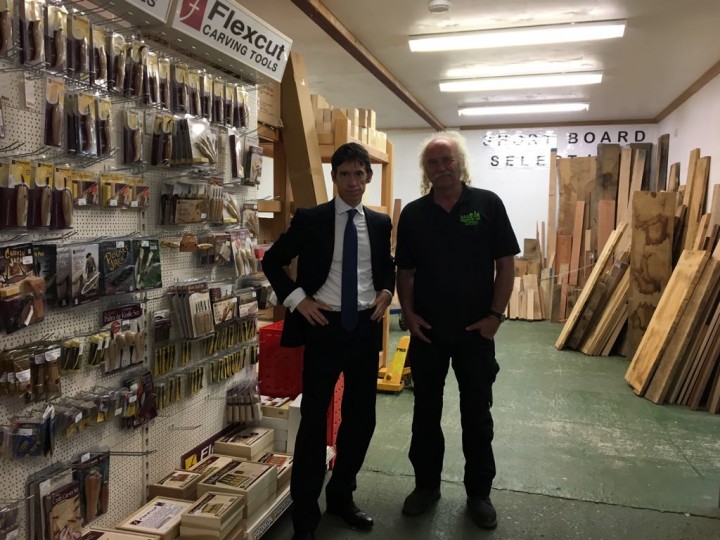 Rory visited G&S Specialist Timber in Stainton on Friday for a meeting to discuss the impact that the Offensive Weapons Bill will have on the business.

This bill, which is designed to limit the availability of offensive weapons and, as a result, combat knife crime, contains new restrictions on the online sale of bladed articles and their delivery. It has passed its first and second readings in the House of Commons and is currently in committee stage, during which amendments can be submitted for Government consideration. G&S Specialist Timber, which employs over 20 people and sells specialist carving and woodturning tools, does the majority of its business online and regularly ships bladed tools to businesses and craftsmen in Britain and worldwide. As a result, this legislation, if passed in its current form, will have a significant detrimental impact upon the business and others like it.

Wishing to express these concerns to Rory, Garry Stevenson, the founder of the business, arranged a meeting and a tour of the premises. Mr Stewart sympathised with Mr Stevenson and made several suggestions about what can be done. He also offered to arrange a meeting with the minister concerned, in an attempt to find a counter proposal that satisfied both parties. Afterwards, Rory visited the Alpaca Clothing Co., which is run by Joy, Mr Stevenson’s wife, and expressed his admiration for them and their businesses.

Rory said, “The fight against knife crime is a serious one and, although I share the Government’s strong desire to ensure that offensive weapons do not end up in the hands of criminals, I am nonetheless concerned at the impact it will have on businesses like Garry’s. We need to approach this sensitively, ensuring that these measures are implemented in such a way that we combat the scourge of knife crime while also ensuring that small, local businesses, like Garry’s, do not unnecessarily suffer in the process”.