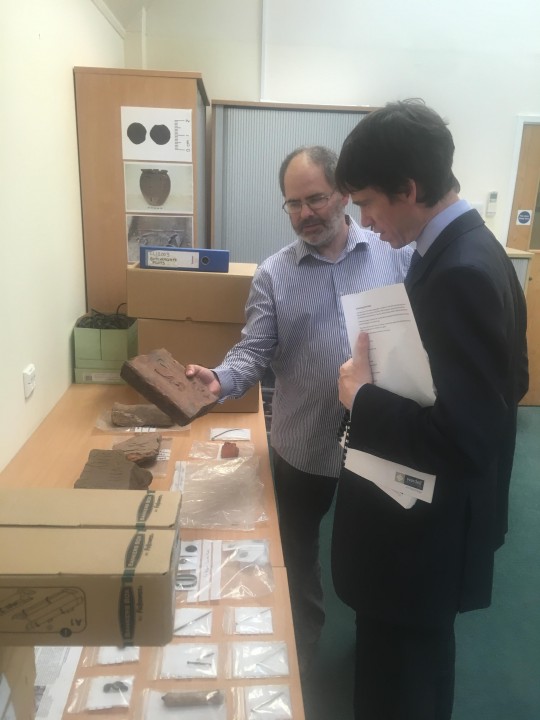 Rory has visited the offices of Carlisle-based commercial archaeologists Wardell Armstrong, to study their recent, major discovery of a Roman bathhouse.

Wardell Armstrong, in excavations beginning in May 2017, have uncovered the remains of three separate rooms along the Northern bank of the River Eden, in central Carlisle. All the rooms contain evidence of under floor heating and were discovered alongside piles of tiles, which suggest that this was once a multi-storey building. Archaeologists have also uncovered a number of well-preserved artefacts, including Roman coins, pottery and women’s hair pins.

The excavation was commissioned by Carlisle Cricket Club, who own the site and had proposed to build a new pavilion on it. However, the quality and extent of the remains caught the public imagination and led to a more extensive Phase 2 evaluation, assisted by over 140 volunteers. This has established that the bathhouse would have once been one of the largest in Roman Carlisle, and was probably associated with Stanwix Roman Fort on the line of Hadrian’s Wall.

Rory said: “This has been an incredibly interesting visit. Sites like this remind us of Cumbria’s historical heritage and these exciting discoveries will deepen our knowledge of our area’s Roman past. It is fantastic that such a rich seam of human history lies so close to us here in Cumbria, and I hope to see far more investment in this site to make it accessible for many, many years to come. Frank and his team at Wardell Armstrong should be incredibly proud of what they have accomplished.​”