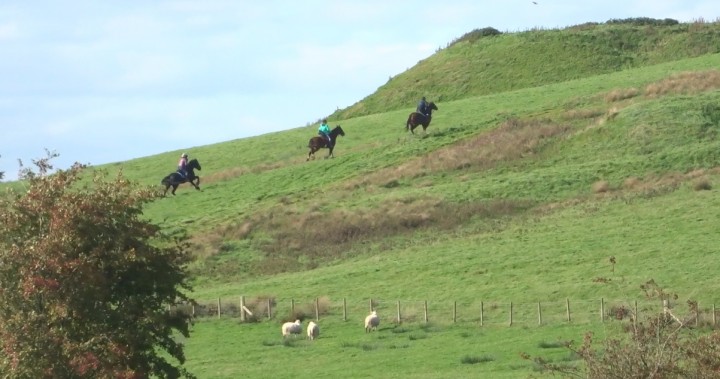 Rory is delighted to launch The Reiver Ride – a journey through The Forgotten Lands to celebrate the rich Border Reiving history of the area.

The Reiver Ride on Saturday, September 7th, is the first of what will become an annual event, with different routes every year. Riders are invited to choose between two routes – 18 and 12.5 miles – both of which take riders on a journey past former bastle houses, pele towers and through the stunning countryside of this forgotten part of Cumbria.

The routes have been devised by Mr Stewart and local equestrian business owners Chris Parsons and Pam Copeland with help from local farmers and the Bewcastle Hunt. There will be pit stops for food at six miles at Bailey Mill and 12 miles at The Row. The routes are predominantly on quiet, country roads but there will be opportunities for gallops through fields and canters through woods. In the evening, The Reiver Ball will be held at Roadhead Village Hall with live music and a bar.

Mr Stewart first had the idea for The Reiver Ride to raise the profile of the The Forgotten Lands – the north east corner of Cumbria. The area is one of the very last examples of historic farmed landscape in Britain, where traditions and the farm buildings themselves go back unbroken over a period of at least six centuries.

Mr Stewart said: “I am thrilled to launch The Reiver Ride, which I hope will become a firm fixture in every riders’ calendar in Cumbria and The Borders. I was keen to hold an event that celebrated the Reiving history of this very special area, which has a great, strong community of small family farms. Many farmers inherited the land from their ancestors and feel deep ties to the land that nurtured and shaped them. And the names of the farms today are exactly those preserved in the bard ballads – most famously ‘The Fray of Suport’, which describes a ‘hot trod’ when an English resident from Solport attempted to regain his property stolen by Scottish Border Reivers. I’m very much looking forward to dusting off my riding hat and riding across the lands the Reivers would have known and seeing the same landscapes as they did hundreds of years ago.”

There are many deep layers of history in the Forgotten Lands. The centre of the area is the Bewcastle Cross, where The Reiver Ride will starts and end this year and which was described by the scholar Nikolaus Pevsner as the greatest piece of sculpture created in the early 8th century. Beneath it lies one of the most unusual Roman Forts in the entire Roman Empire – with a hexagonal rather than square or oblong base occupied by the Dacian regiment. And even further beneath that a still older Celtic pre-Roman shrine – the shrine of the god Cocidius – a god worshipped in early Britain, especially in the north and west, whom the Romans compared to Mars. Beside the Cross stands the ruins of one of the great castles of the Border – that of Bewcastle – and in the churchyard, the tombs of the Armstrong and Routledges who led the Border Reiving in the area. Today their lineal descendants maintain a proud sense of their Reiving history and have preserved unbroken traditions of stockmanship.

Farmer Steve Pattinson, of Roadhead, said: “We’re very proud of our history in this area – there’s so much north of Hadrian’s Wall up here and most people don’t even know about it. Really we’re Cumbria’s best kept secret but it is definitely time people knew more about our history and were given the chance to wonder at the beauty of the land up here. I’m very much looking forward to taking part.”

Pam Copeland, of Bailey Mill Accommodation and Trekking Centre, said: “This ride is a fantastic opportunity to introduce people to our historic area and explore our wild countryside. The Reiver Ride is offering people something unique – the chance to get a hint of what it felt like to be a Border Reiver riding around these lands hundreds of years ago.”

Chris Parsons, from Off The Beaten Track Rides, said: “I know people are going to absolutely love this ride! The first gallop up the hill to Peel O’Hill is absolutely breathtaking. I would encourage all riders to get involved. And we already have ideas for routes over the next few years – this is only the beginning.”

Anyone wanting to take part in the ride should email [email protected] asking for an entry form. Numbers may be limited – on a first come first serve basis – due to parking restrictions.