In mid-March, Rory launched the first of what he hopes will be a new model for Cumbrian lunch clubs for the elderly. The Lyvennet Lunch Club’s luncheon meeting at the Crosby Ravensworth community pub, the Butcher’s Arms, was conceived by councillor Joan Raine, in order to provide a social group for the elderly, while bringing much needed income to a community-owned pub. The idea emerged from a meeting, earlier in the year, between Eden District Council Chair and Crosby Ravensworth resident Joan Raine, Rory Stewart, James Airey (Cumbria County Council portfolio holder for Adult Social Care), and Eden District Councillor and ‘business ambassador’ Debbie Wicks. Following last week’s launch event it is hoped that more rural pubs will join the movement to host community events on their premises, providing a social outlet for residents who are unable to travel further, and an income for the pub.

The luncheon club was attended by 20 locals as well as Sue Maughan from Age UK, Mike Clayton of Pub is the Hub, Councillor Debbie Wicks, and representatives of Orton’s George Hotel. Local churches were represented by the Reverend Phil Dew and Alex Barbour of St Lawrence’s church. Members ate scampi and shepherd’s pie followed by spotted dick whilst Rory mingled and chatted with those present before giving a brief talk on the importance of the event, and – as a share-holder of the pub – his strong support for the venture.

Rory said: “Our rural pubs have the potential to be so much more, when one considers that they can also play host to a range of other services, such as bases for Meals on Wheels, local mini-libraries, and meetings places for clubs such as this one. I greatly enjoyed meeting the lunch club members today and hearing at first-hand how much they value the experience of getting together socially in this sort of environment. Clearly, it benefits both pub and community, and I would love to do all I can to support other communities wishing to follow the lead of Crosby Ravensworth. I will be staying in close touch with those at Cumbria County Council who are looking carefully at this model, and hope to see its benefits replicated in other rural communities in Cumbria.”

Councillor Joan Raine said: “We are delighted to have Rory’s support and backing for this initiative, which we believe will bring real benefits to communities. As an employee of Age UK I have real insight into the needs of our growing elderly population, as well as the need to share services in the current economic climate. This seems the perfect way to solve many problems at once.” 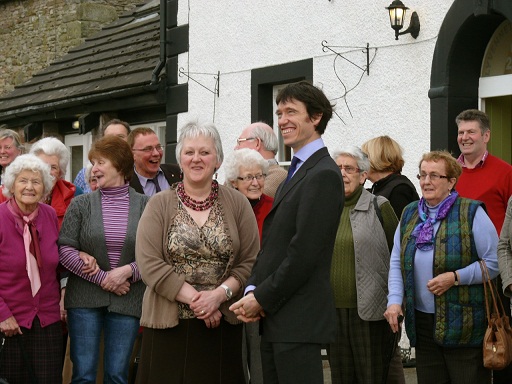 Councillor Joan Raine and Rory with community members at the launch