RORY JOINS FORCES WITH TESCO IN PROMOTING VALUE OF FOOD

Rory Stewart MP on Friday visited the Warwick Road Tesco Superstore in Carlisle – used by many thousands of residents of Penrith and The Border for their weekly groceries shop – to see first-hand the work of the store’s manager, Phil Pearson, and his team members Vicki Pearson and Penny-Jane Davidson, who are addressing important issues around local food consumption. He was also able to congratulate Tesco on the lead they are taking in addressing food waste.
‎
Rory’s visit comes on the back of new Government initiatives including Defra’s pushing through of a new code on supermarkets and food businesses, leading to a dramatic drop in the amount of food in supermarket dustbins and to new ways of helping families not to throw away food before they need to. The Government’s land-fill tax has massively reduced the amount of food which isn’t recycled, packaging has been reduced and improved – new re-sealable cheese packets for example allow cheese to last much longer – and there has been a surge in public education, explaining to the over sixty per cent of people who still believe that products last longer outside their packaging, that the reality is the reverse; or that products don’t need always to be frozen on the day of purchase.

The local MP also learned about this year’s sixth Neighbourhood Food Collection at Tesco – a 4-day drive which enables shoppers to donate food to a central pool of items which is then distributed amongst those in need. Tesco now has a total of 500 food collection points in stores across the country, allowing people to donate food all year round, wherever they live. Shoppers can also donate cash, to which Tesco adds a 30% donation. Since Tesco’s first Neighbourhood Food Collection in December 2012, shoppers have donated 21.5 million meals to help charities such as FareShare. The MP also learned how FareShare has pioneered a smart phone app through a pilot currently in London to enable local charities to obtain surplus food directly from Tesco, so that it is not wasted.

Importantly, Rory discussed the potential for working more closely with local suppliers, which manager Phil Pearson agreed was something that they could collaborate on.

Speaking on Friday, Rory said: “I would like to praise Phil and his team for their energy and positivity, and for dedicating their time and resources to this excellent initiative. Not only is this a brilliantly local response to local communities, but I am also very encouraged to know that Phil is keen to make use of local producers, and this is something that I would like to work on with him. If we can support people who are going through challenging times with food that has been locally produced, we are aiding not only our consumers, but our producers too. This is a really exciting vision for local communities.” 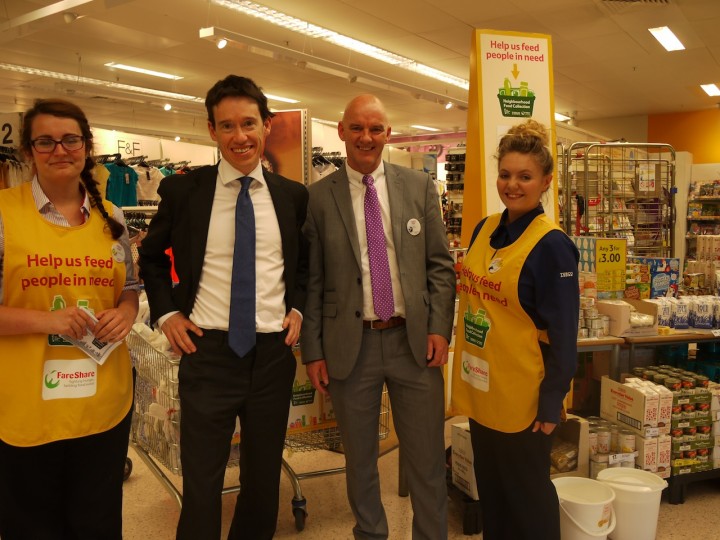