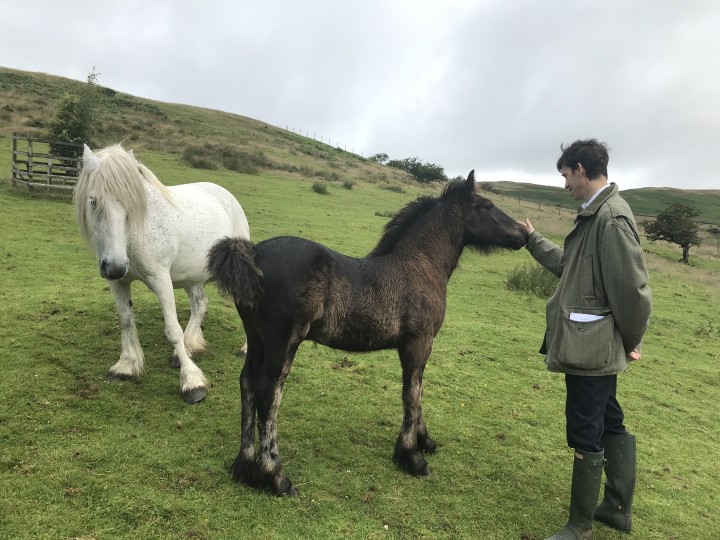 Rory visited a group of fell ponies on Roundthwaite Common to learn more about their heritage and current pressures breeders feel they are under.

Libby Robinson, of Globetrotter Stud, took Mr Stewart to visit her mares and foals on Roundthwaite Common ahead of an exhibition she has organised, ‘The Heritage of the Hill-bred Fell Pony’, which opens at Rheged on Monday, August 5th, at 4pm.

The exhibition explores the Fell pony’s way of life on the upland fell as semi-wild ponies living in herds all year round with photographs, a short film, artefacts and the work of local artists. Fell ponies are the native breed of hill-bred pony from Cumbria, west of the Pennines. The ponies have been bred on the fells for centuries by farmers with common grazing rights, and it is those very fells that keep the ponies traditional hardiness and sure footedness, which is essential to their use as a working pony.

Ms Robinson spoke with Mr Stewart about the pressure farmers are coming under to take the ponies off the fells in winter and said she believed there is a lack of recognition of the biodiversity created by their grazing habits. She would like to see the Fell pony find the fame that other Cumbrian native breeds like the Herdwick sheep has achieved.

After the visit Mr Stewart said: “Fell ponies demonstrate a really interesting example of some of the tensions between the environment, land management and native breeds. I want Cumbria to be the place that gets the balance right between our objectives in biodiversity and environmental improvement on the one hand and people and native breeds on the other. Through practical compromises I want us to help native breeds, communities and the environment – instead of lurching to the extremes of rewilding on the one hand and intensive farming on the other.

“I would very much encourage anyone who can to visit the exhibition at Rheged to find out more about these beautiful Fell ponies.”

Libby Robinson, of Globetrotter Stud, said: “The Fell pony breed is under threat of losing habitat and the traditional way of breeding so will lose its breed characteristics and hardiness if not supported by the herds on the fells. The aim of the exhibition is to bring to the general public an awareness of the Fell pony and the importance of maintaining its presence on the Cumbrian fells.”