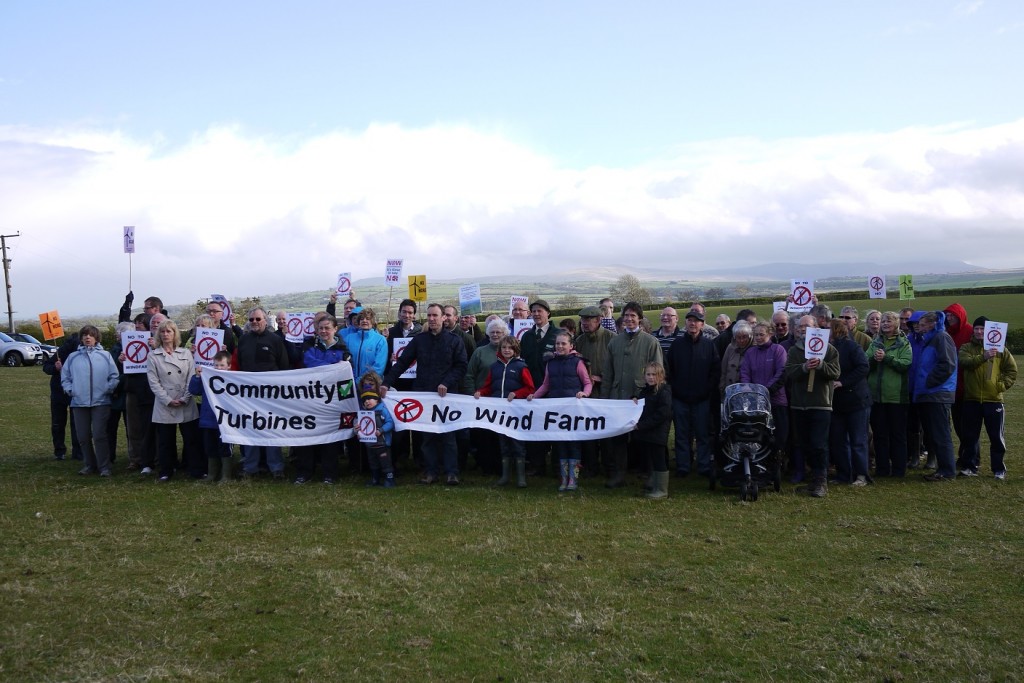 Rory on Saturday supported over two hundred local protestors at the proposed Carwath Wind Farm site, scene of application 2/2013/0227 to Allerdale Borough Council for the construction of three turbines of 115 metres in height, which if built could be viewed from the National Park, and across the whole Solway Plain.

The local community has strongly opposed the application on grounds of landscape and wildlife impact,  the detrimental effects on the tourism industry, noise and health issues, property values, and other negative impacts on local residents. The proposed industrial-scale structures would dominate the landscape from the northern fells.

Rory said: “I am personally strongly opposed to the building of turbines in Penrith and the Border, for reasons of local democracy, economy and landscape. The centre of our economy is now tourism, and the centre of our area is the Lake District National Park. The three million visitors who come here every year, and support tens of thousands of jobs in the area, come because this is one of last ‘unspoilt’ landscapes in Britain. We have a landscape of tight valleys, of small farms, of sheep, and peace, famous from Finland to Japan. The impact of 350 foot high, industrial, white spinning metal on the sound, the look, and the soul of the intimate scale of the Northern Fells of the Lake District is immense, and immensely negative. It would be a poor short-term decision for our economy. Cumbria has already contributed enormously to the nation’s energy needs – not least through the nuclear industry. We are taking the lead in Wigton, and elsewhere on smart grids and new approaches to energy conservation. And the aim of reducing carbon consumption, will also be massively reinforced – as Professor Dieter Helm argues – by converting coal-fired stations to gas, at a fraction of the estimated one hundred billion pounds currently committed to Wind Turbines.  Today we can clearly see how strongly local communities feel about protecting their local landscape, and not only for their own benefit: for the benefit of all who visit Cumbria precisely to see and enjoy our beautiful countryside. The protestors we see here today come from all walks of life and ages; this is not something that attracts a narrow part of our society. Such wind farms affect us all, and I am proud to see so many people give up time on their Saturday to show how very concerned they are.”

Rory has created the community website www.cumbriawindwatch.co.uk as a means of bringing community opposition groups together to share learning and resources to aid their campaigns, and the website has been instrumental in increasing communication between groups across the county.

His comments follow those of Energy and Business Minister Michael Fallon, who is calling for measures to protect rural shires from the increase of applications, and the means for local communities to enjoy better planning protections. Rory will also be calling on local councils to look to introducing ‘buffer zones’ for residential areas in their local plans and ‘SPD’s (Supplementary Planning Documents).