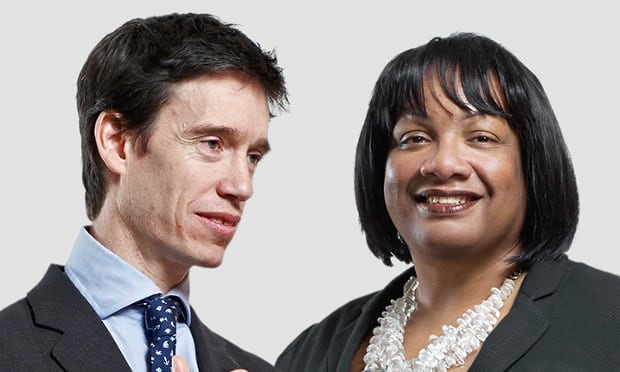 Article first published in The Guardian on 4 April 2015.

First impressions?
She was lovely. I liked the fact that she started by asking questions and took an interest. She was funny and relaxed. I was a bit intimidated, actually, going to meet her. I thought she might make it very political – “I despise everything you stand for: you’re an evil person” – and she didn’t do that at all.

What did you talk about?
I had these lovely visions of her with her grandfather in Jamaica, checking out the men coming to take her out. She was very touching about her son, too – the sense in which she’s giving him space. He sounds very different from her, and she was very comfortable with that.

What did you agree on?
We both still believe that this job is about ideas. It’s not about procedures and the Chamber.

What did you disagree on?
I don’t agree with this idea that the dream is to make Britain into Scandinavia, with better weather. Diane sees Scandinavian countries as being a great ideal – social justice, equality, innovation, prosperity. But Britain is a larger, richer, more untidy country, in the best sense of the word. We are 10 times the size of Denmark. A lot of Danish people I know want to get out of Copenhagen and move to London. They get bored living in Denmark.

This is a really cosmopolitan country; the fifth-largest economy in the world. London is probably the greatest city in the world. Thirty-six per cent of the people who live in London don’t identify as being white, more than half are born outside the UK. Scandinavia’s not like that. I was a bit surprised that somebody who represents a London constituency from a minority background would think Scandinavia is the way to go.

The other thing I did call her on is when she said, “One of the worst things about being on a date in London is that you don’t know the background of the person you’re with, and the great thing in Jamaica is that my grandfather could always say who their grandparents were.” And I said, “Really? But you’re a progressive person. Do you really want people judged by who their grandfather was?”

Why should people vote for her?
That’s a good question. On the one hand, she’s highly intelligent, she’s idealistic, she’s highly energised. She believes in her job. On the other hand, I disagree with her. So I’m not exactly encouraging the electorate to go out and vote.

Why shouldn’t they vote for her?
It’s politics, in the end. It’s nothing personal. I think her vision of Britain isn’t mine. If we take that example of the Scandinavian conversation, I believe we should be thinking about a much more expansive, much larger perception of ourselves, much more involved in the world. I think the Scandinavian vision has the danger of being quite isolationist.

Would you introduce Diane to your colleagues and friends?
Definitely. In fact, I did a big event for the Scottish independence campaign where I was building a huge pile of stones on the English-Scottish border, and trying to get Labour to work with me on keeping the union together, and I asked her to come up to Scotland. But I think she probably thought: “I don’t want to be seen with a Tory MP.” I’d definitely introduce her to friends. I think they’d find her interesting, engaging and provocative.

Describe her in three words:
Progressive but insular.

What do you think she made of you?
I don’t know – she’s difficult to read.

Would you form a coalition?
That would be a catastrophe. I think she has felt since before she went to university that the Conservatives represent a lot of things she doesn’t like.

If you could change one thing about the date, what would it be?
Food. I’m really hungry.

Would you meet again?
Yes, definitely. But next time I’m going to eat dim sum.

First impressions?
Had it been a real date, it would have been very interesting. He’s a real Englishman in that he’s self-contained, but he’s interested in ideas, which is great.

What did you talk about?
We talked about politics a lot. He talked about being a governor in Iraq, because I was really intrigued. That was one thing I knew about him; he governed two provinces. My image was of Victorian governors. I was curious about what the 21st-century governor was like.

What did you agree on?
That the best motivation for a politician is to want to change the world. We also agreed on the Iraq war.

What did you disagree about?
Not much, but then I never really asked him why he was a Tory. I suspect had I asked him, at that point we would have disagreed. I thought it was a bit rude to ask.

Why should people vote for him?
Because he’s not an MP for personal ambition. If you’ve governed two provinces in Iraq, you’ve already had a lot of power. I think he’s in politics because of his ideas, and politicians who have ideas are a good thing.

Why shouldn’t they vote for him?
Because he’s a Tory.

What do you think he made of you?
I don’t think he would have met many people like me. Because I’m a socialist. I’m not sure he knows many socialists, apart from the Iraqi version, which is possibly a bit different.

Would you form a coalition?
No. I don’t believe in coalition politics.

If you could change one thing about the date, what would it be?
We would have spent longer together. I would have liked to have asked why he was a Tory and to have talked more about his experiences in Iraq.

Would you meet again?
We will meet again, because we work in the same place. I’d like to talk to him some more.