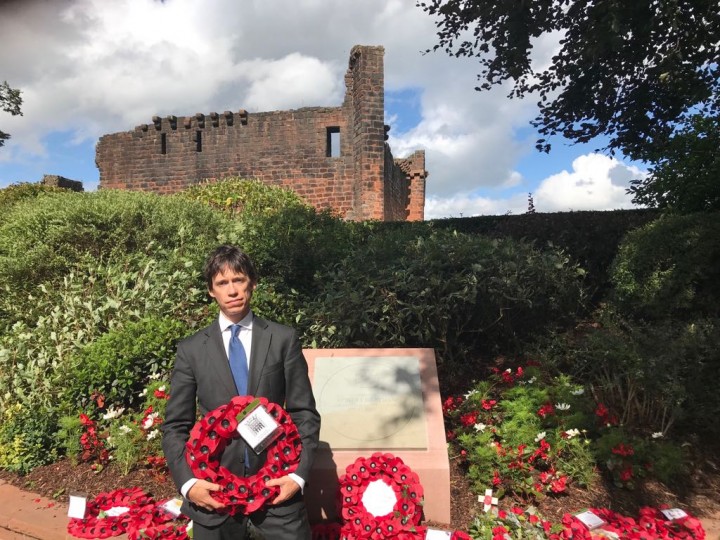 Cumbria’s excellent Museum of Military Life at Carlisle Castle has a new Exhibition, ‘Lest We Forget’. I went expecting to focus on the victims of war, I left reflecting on how we fail to remember them. The First World War is less visible in Cumbria than in other parts of Britain. While the centre of every village in Oxfordshire or the Highlands seems to be dominated by a statue of a soldier or a cenotaph, there is no equivalent in Penrith, or Brampton, or Longtown.

But the museum was filled with beautiful Cumbrian memorials to the First World War in marble, and bronze, silk and silver. The problem is that they were no longer in the towns or villages for which that had been made. Many – perhaps most – of the Museum’s exhibits came from public buildings or squares that have since been demolished, from tanks reduced to scrap, and even, disturbingly, from finds on rubbish tips. While some of these losses are understandable – it is not easy to maintain an Edwardian drill hall – some of the losses were driven not by necessity but by something that felt more like indifference. To take just one example, the exhibit includes a great, engraved silver award for the best runner in a Carlisle school, made at great expense in memory of one of the war dead – with sixty names around the rim and space for many more – that, for some reason, the school just stopped awarding in the 1980s.

This indifference was particularly striking because almost every case in the main museum re-emphasised how tight the connection had once been between Cumbrian society and the military. There are good photographs of many of the Cumbrian soldiers – taken before their departures for the Western Front – in which the Officers look like matinee idols: tall, beautifully dressed, with bristling moustaches, while the men look often like awkward underfed school boys. Some of this may literally have been down to different diets – and a great deal must have been down to having the wealth for a good uniform, and a good haircut. But the photographs also record how class distinctions were eroding. The photographs of both officers and men are the same size, in the same frames, by the same photographers. This is the first period in history in which the names of soldiers are honoured at the same time as officers’ on the same memorials in identical font, in alphabetical not rank order.

The hundred who contributed so enthusiastically to the giant silver shield for shooting must have expected that it would continue to be treasured and awarded for many generations. And the officer’s mess of the Border Regiment, which was persuaded by an entrepreneurial London silversmith (his advertising brochure survives) to buy a centre-piece for their table – it would cost today perhaps twenty thousand pounds – would have expected not just their regiment, but their officer’s mess to admire the piece for centuries to come as part of an unbroken military tradition stretching eight centuries back in time as well as forward. The piece they chose represents, in shining armour, lances and rearing horseflesh, the capture of the Earl of Gloucester in 1141.

This removal of monuments from communities and associations and public space – and their relegation to exhibitions in museums – has happened very quickly. Here in Cumbria the most dramatic surviving memorials are now the First World War memorial hospitals in Brampton and Wigton, which somehow survived when their equivalents were closed up and down the country – many at the start of the NHS – only twenty years after they had been finished. But they too are squeezed by the modern world – by funding pressures in public health, by new fashions in medicine, by the idea that such heritage ‘is no longer fit for purpose’.

But even in the museum, these memorials still carry a powerful message. It is too easy to remember only the waste, the hypocrisy, the suffering and the failures of the trenches: to regard the class traditions as a scandal, and the pride of these soldiers and their families as a delusion. But the sense of pride and honour and duty cannot be overlooked. Particularly in the photographs of men from a very complex, confident and self-aware society: very brave men, in a very understated Edwardian mould.

Take the picture of the Reverend Theodore Bayley Hardy (there is a book about him in the museum). A schoolmaster turned vicar of Hutton Roof, who enlisted at the age of 52. Repeatedly, he walked across the wire into no man’s land – sometimes wounded, invariably under heavy shell fire – ministering to the dying and leading the stretcher parties back – refusing to leave his post. He did this night after night for two years until he was finally killed. You can see why the people of Cumberland commemorated him in memorials in Hutton Roof and Carlisle – and you can see why they would have expected us to remember him still. Look again at the picture of him. Think what you like of him in his riding britches, and epaulettes, medals and peaked hat, but wonder also what he might think of you.