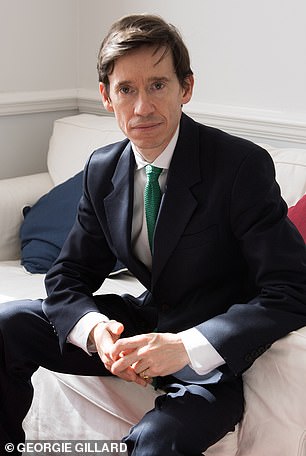 Cabinet minister Rory Stewart last night vowed to tackle Britain’s ‘everyday injustices’ as he launched his bid for No10.

The International Development Secretary pledged to save the high street by tackling the ‘grossly unfair’ business rates that online firms such as Amazon pay.

He also said one of his first acts would be to axe car parking charges at hospitals, blasting them as ‘offensive’.

In an exclusive interview, Mr Stewart said ‘community’ was central to what he believed in as a Conservative.

Outlining his vision for the future of the country post-Brexit, Mr Stewart, 46, said: ‘A great Conservative government isn’t just big flashy ideas that hit the headlines.

‘It’s about sweating a thousand small details and addressing the things that really matter in people’s lives.’

The father-of-two, who was previously prisons minister, said he was the ideal candidate to replace Theresa May and deliver Brexit if she failed to get her new deal through.

Speaking ahead of the European election results, he said he would unite the Conservative Party, get a Brexit deal through the Commons, and save the country from Jeremy Corbyn in power. His blueprint – should he become leader – would include:

Mr Stewart, the son of an MI6 intelligence officer, said he believed the Conservative Party was about having ‘community and values at its heart’ and a ‘sense of fairness’.

He said: ‘I’m a shareholder in far more local community pubs than I would like to be because I’m trying to keep them all going.’

He also said he was ‘very worried’ about the effect of business rates on the high street as he blasted online giant Amazon, which last year paid UK business rates of only £63.4million, amounting to less than one per cent of its sales.

‘I want to do something very radical on business rates. I think it is grossly unfair that Amazon is not on a level playing field with our local shops and we’ve got to solve that. They are making a colossal amount of money in this country, they are paying very little tax compared with their underlying profits and they are not paying business rates basically,’ he said.

He said his ‘radical’ plan to save the high street would be unveiled at a later date.

Mr Stewart also pledged to axe ‘offensive’ hospital parking charges, saying: ‘I would abolish them.’ He said one of his constituents had gone to hospital to see their mother who was dying of cancer, only to come out to some ‘crazy car parking charge’.

‘That is absolutely offensive, I mean these everyday injustices that people are experiencing all the time, summed up for me in that hospital car parking charge.

‘Summed up for me in us giving honours to someone like Philip Green. I would take that knighthood away tomorrow. This is not fair.’ He also pledged to introduce measures to ensure faster broadband speeds, saying the UK had worse speeds than ‘Madagascar and Romania’.

He said: ‘If you are looking for one thing that can transform the GDP of rural areas almost overnight, it is super-fast broadband.

‘If you are looking for one thing that can transform healthcare for people living in remote areas, it is super-fast broadband.’ Mr Stewart said that as a backbencher he led the first big debate on transforming rural mobile coverage.

He added: ‘I pushed Cumbria to become one of the first four pilots on rural broadband.

‘I worked so closely with community broadband networks, with British Telecom to try to revolutionise that.

‘And I am so frustrated that nine years on we aren’t there. It is an absolute no-brainer.’