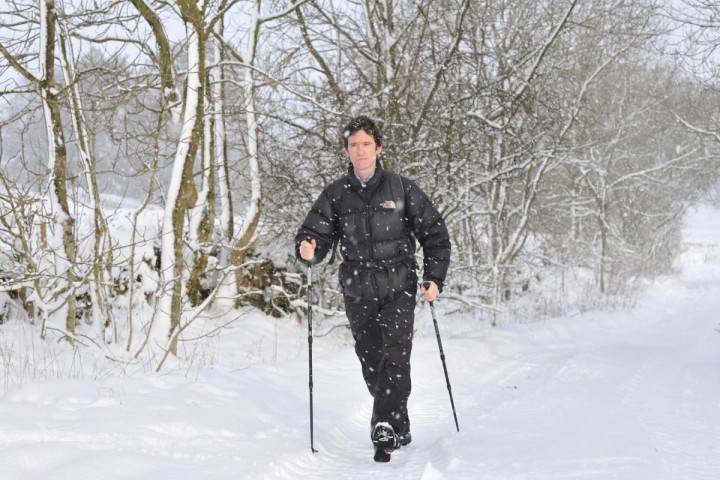 Article first published in The Times by Magnus Linklater on 14 September 2013.

For Rory Stewart, getting to know a country means walking over it. As a youthful diplomat in his twenties he learnt about rural Pakistan, Iran, Afghanistan and India by walking through them, covering 6,000 miles, staying in village houses and talking to their people.

Now he is doing the same in Scotland. For the past year the Conservative MP for Penrith and The Border has been walking from his constituency in England through the Scottish Borders, moving farther north each time.

It is an unfinished journey, and from it he believes he can learn more about the mood of both countries than from any number of constituency surgeries or TV chat shows.

What has struck him, as a Scot, is the contrast in attitudes on both sides of the Border. In England, though there may be some resentment about the way Scotland is seen to have benefited from the devolution settlement, the mood in places such as Cumberland or Northumberland is surprisingly warm towards the Scottish; that view, however, is rarely reciprocated north of the Border.

He explains: “In Northumbria people would say ‘We see ourselves as honorary Scots’. But if I crossed the bridge to Coldstream, I couldn’t find any Scot who would say they were honorary Northumbrians. A lot of people in England seemed to enjoy a view of Scotland as a romantic country of hardy people but there were very few people in Scotland with a romantic view of England.” Although he found that most Scots had a strong sense of their own identity, there was little agreement as to what that identity was.

“You’d find people who would feel that England was a very alien country, then when you get them to talk about their own home town in Scotland, they would feel quite disillusioned. I remember one person who talked at great length about how much they wanted Scottish independence, but then said they were hoping to move to California — it was a sunnier, happier place.

“Another issue that was odd was that people talked so little about history. Most nationalisms in the world go on about history, because after all, what is a nation but its history? But people would say, ‘No, we want Scotland to become independent because its economy would be more efficient that way’ — it’s a kind of civic nationalism, a particular unit that’s going to operate better.”

That did not mean, he said, that the Scots he spoke to were uninformed about their country’s past. He talked to people who could tell him precisely where the guns had been placed at the Battle of Flodden, or had carried out deep research into the Gaelic bards. However, that did not translate into any strong sense of what Scotland’s role as an independent nation might be.

“No one I met was comfortable with the Braveheart image,” he said. “Everyone would say, of course, that was not true. But what it was going to be replaced by was even less clear. It didn’t fit into a bigger story of what Scotland might be as an independent nation.”

One thing, however, was clear: whatever view they might have about Scotland’s future, they felt themselves Scottish, not British.

“There is absolutely no doubt at all that people see themselves as very very Scottish. You may not be able to explain what it means, but perhaps what matters more is that you feel it,” he said.

The dilution of Britishness is shared on both sides of the Border and it concerns him deeply.

“Yes, there is a weakening of British identity,” he said. “The sense of a bigger unit, the sense of being happy with British identity is becoming more difficult for people, and people are falling back on smaller descriptions of themselves. They feel less generous towards including different, more complicated parts of their country.

“A more traditional British identity would be connected to Parliament, to national institutions like the Army, or pride in great British universities and that is falling away, people feel less attraction to those things.”

He is in no doubt that it would need leadership to rekindle a belief in Britishness and he believes the Better Together campaign needs to strike a more positive note.

“I do think, as a politician, in the long run positive arguments win out over negative arguments. You can’t simply run a pessimistic argument about the risks or costs in separation. Just as if you were discussing a relationship or a marriage you have to say more than just, ‘look, if we break up, you’ll lose your house’.”

Next year, he intends to campaign, not just against independence but in favour of a Britain within which he believes the Scots will thrive. He cites the case of his father, a former soldier and diplomat, to make the case.

“My father is powerfully, obsessively Scottish,” he said. “As a diplomat he organised reel parties, pulled out his skean-dhu, enjoyed putting on his tartan trews and his tam o’shanter, but he did all that in the context of being British.

“He had a wonderful way of teasing the Russians or the Chinese with all this, to remind them that Britain wasn’t the stuffy stereotype they had in mind.

“But it wouldn’t be as much fun for him if he wasn’t part of the United Kingdom. And, more important, he wouldn’t be able to use his Scottishness to wind up the English.”