I’ve got a plan, says Rory Stewart — the MP whose life Brad Pitt wants to film 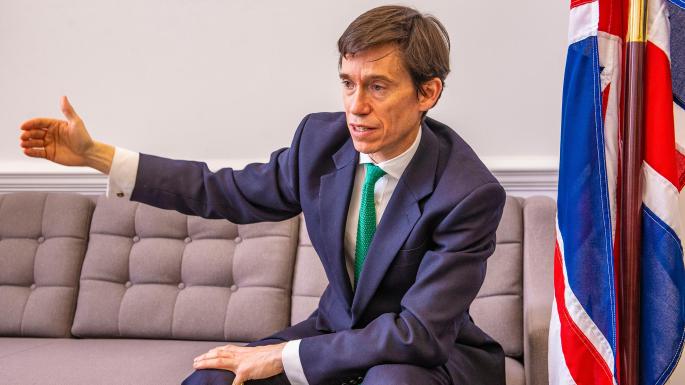 Article first published in The Sunday Times on 5 May 2019 by Caroline Wheeler.

In his plush new office in the Admiralty building, where Royal Navy chiefs discussed their secret operations for hundreds of years, Rory Stewart wonders what Lord Nelson would have made of the events that elevated him to the cabinet.

The 46-year-old, who intends to run for Conservative Party leader if Theresa May steps down, became international development secretary on Wednesday after Gavin Williamson was unceremoniously sacked as defence secretary following an inquiry into a leak from the National Security Council (NSC).

“We’ve got to reset,” he says in the boardroom where the victor of the Battle of Trafalgar and hero of a thousand pub signs lay in state in 1806, “because otherwise I feel the ghosts all the way round this room thinking, ‘What on earth are you guys doing?’”

He might be the new kid, but Stewart, who will also sit on the NSC, wastes no time in demanding his new cabinet colleagues end the leaks. Politicians must be able to exchange views in private, he says. “We’ve got to get this right, because this is what the Americans would expect us to get right, what our potential adversaries would expect us to get right, in order to have frank discussions.”

Ministers must feel able to speak the truth, “in order to challenge, in order to say what I would have said about the Iraq War, which is: ‘You’re out of your mind, this is not going to work, it doesn’t matter that people have been killed, more will be killed if you keep doing this’ . . . If people leak, nobody is going to have those conversations and we’ll all be less well off.”

Stewart has served in the British Army, although for less time than people imagine — five months in the Black Watch regiment in his gap year. He became the deputy governor of a province of occupied Iraq during 2003 and 2004, which is the subject of his book, Occupational Hazards. While he initially supported the Iraq War, the international coalition’s inability to secure a more humane, prosperous state led him to believe the invasion had been a mistake.

His life before politics was so action-packed that in 2008 Brad Pitt’s film company bought the rights to a biopic. But having tutored Princes William and Harry, served in the Foreign Office in Indonesia and Montenegro, and trekked 6,000 miles through Afghanistan, Pakistan and Iran, the father of two is ready for a new challenge.

It is the climate change emergency he wants to address. Setting out his priorities in his new role, he wants to see more of the £14bn foreign aid budget spent on the environment. “We need a completely different approach to try and deal with emissions,” he says. “We need to think about what we can personally change in Britain, but we must recognise the air we breathe could be polluted by China or the United States even if we were to shut down everything in this country.”

He adds: “If you want a way of explaining why we spend 0.7% of our budget on national aid, we are facing a climate cataclysm: 30% to 40% of species on Earth will be gone by 2050, having effects on hundreds of thousands of people’s lives.

Stewart, who established the Turquoise Mountain foundation in 2006 to assist with the revival of Afghanistan’s traditional arts at the request of Prince Charles, is an unashamed supporter of the 0.7% aid target. Scrapping the commitment is thought to have support among grassroots Tories, but Stewart believes he can win over critics.

“British people are very, very generous, they support an enormous number of international charities, they really care about the world . . . but they get a bit suspicious when the government gets involved, so we need to solve it.”

He plans to do this by getting citizens “more involved” and being “intensely practical” as well as “making sure money’s spent well”. The MP for Penrith and the Border argues that protecting the planet is “politically smart” for Conservatives and will attract young voters.

“It’s a great opportunity for citizens to get involved and to think about what they can do in their everyday lives. For example, to understand that cycling is good for carbon, it’s also really good for your sex life.” In parliament, Stewart recently pointed to a study suggesting that men who ride a bicycle have the sexual prowess of those five years younger.

He is unlikely to have much time to put the theory to the test. Later this week the Brexit talks with Labour are expected to resume, with a comprehensive but temporary customs arrangement likely to be put on the table.

Although the former prisons minister claims May’s deal has always been his “strong preference”, his second choice is to do a deal with Labour. He is ready to sell a deal if one is done.

“We can’t go on with red lines,” he says. “So if we went for some sort of customs arrangement, there are certain things we would have to remember. Firstly, we have to be clear that is not being in the EU. Turkey is in the customs union; nobody thinks Turkey is a vassal state.

“We would have complete control of our borders and immigration, which really mattered to my voters. Thirdly, the city of London would not be regulated. Fourthly, if we did it right we would have access to not only all the European markets but also potentially to 60 other free trade agreements . . . that is not my preferred option, but I think it is certainly something we should explore because we need to leave the EU, but in a way that is responsible, that respects Europe.”

Stewart says the local election results have highlighted public frustration with the Brexit impasse. “I think whatever side of the Brexit debate you are on, people are thoroughly impatient and people just want to get it done.” Then, with his aides growing increasingly agitated, Stewart gets up quickly and apologises. “I am so sorry, I must dash. I am off to see the Queen at Windsor Castle this afternoon to be sworn in to the privy council.”