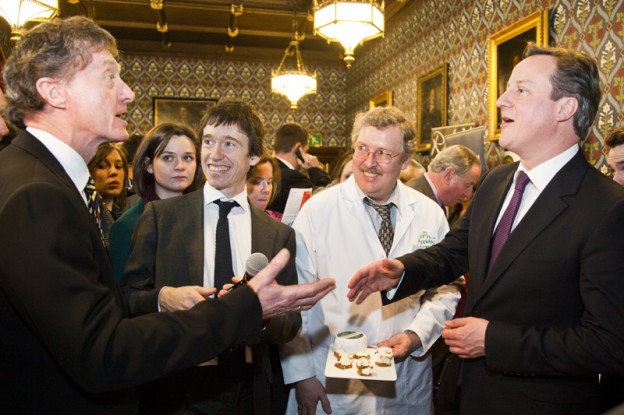 The Prime-Minister was among a hundred MPs who attended “Cumbria Day’ in Parliament today. The day, held in the Jubilee Room at the Houses of Parliament, and organised by Cumbria Tourism, Taste Cumbria and one of the MP’s offices, celebrated all things Cumbria to raise the profile of Cumbria in the nation’s capital. It was supported by all six Cumbrian MPs: Sir Tony Cunningham MP, Tim Farron MP, Jamie Reed MP, John Stevenson MP, Rory Stewart MP and John Woodcock MP. Among the attendees were Cranston’s Butchers and Sillfield Farm who provided Cumberland Sausages, The Toffee Company with Penrith Fudge, the Dalemain Marmalade Awards, the Ulverston Brewing Company, Hard Knott Brewery and Coniston Brewery, the Lake District Cheese Company and Appleby Creamery, Agnes Rose oils and vinegars, pies and cakes from the Broughton Village Bakery, Green’s Bakers and Confectioner and Grasmere Gingerbread. A selection of Cumbrian businesses also attended the day in Westminster including the Derwent Cumberland Pencil Company, New Balance Trainers, Stobart Air as well as representatives from Lake District Search and Mountain Rescue Association, Visit England, the National Trust, English Heritage, the Lake District National Park and Cumbria County and District Councils.

The event was opened by eminent mountaineer and Cumbrian Resident Doug Scott. Rory Stewart MP then used his question in a packed Prime-Minister’s questions to invite the PM to attend. The PM accepted, saying in parliament “Cumbria is a beautiful part of our country, with so much to offer. I have fond memories of the time I have spent there, not least visiting the Butchers Arms in Crosby Ravensworth, a community owned pub and amazing example of Big Society in action.”

The PM visited the stalls later in the afternoon, trying local produce and adding: ‘I am absolutely delighted to have attended Cumbria Day in Parliament. I have fond memories of an energizing early morning swim in Ullswater! I wish the campaign for Cumbrian tourism every success.’

Following the event, the six MPs formed an Associate Parliamentary Group for Tourism and Business to take forward Cumbria’s priorities in Westminster on a cross-party basis.

Rory said: ‘The day has been an absolute triumph. It has been a wonderful opportunity for all MPs to work together on a cross-party basis for a county we all love. It has put Cumbria, its products and our beautiful landscape in a much-needed spotlight. And I hope it is the beginning of much more cross-party work.’

John Woodcock MP said: ‘I was so glad that this event successfully created a buzz around Westminster and gave local producers a platform to promote their superb wares on a national stage. All areas of the county – including Furness – have so much potential to create jobs by attracting visitors and I look forward to helping take this forward in the months ahead.’

Sir Tony Cunningham MP said: ‘Cumbria Day has been a great success, giving the opportunity for fantastic local producers to show off their produce in the nation’s capital.’

John Stevenson: ‘Cumbria Day has brought focus to Westminster and enabled Cumbrian MPs to work together for the betterment of business and tourism in Cumbria.’

Tim Farron: ‘Cumbria Day, today proved to be the best of its kind in Westminster giving an opportunity to make sure that Cumbria is heard in London.’

Jamie Reed said: ‘“Cumbria Day has been a great success.  Local MPs have long known of the amazing produce available in our region and it has been great to be able to showcase it in Westminster. Next year’s event will be bigger and better.”

Eric Robson, Chair of Cumbria Tourism said: ‘Thank you to Rory and all his colleagues. The day has been a tremendous success; it shows the diversity and quality of Cumbrian products. We know how good Cumbria is, we just need to sell it to other people. The Lake District-Cumbria is a very successful brand. I think following on from today, the real triumph will be the ongoing work with the All Parliamentary Group’.