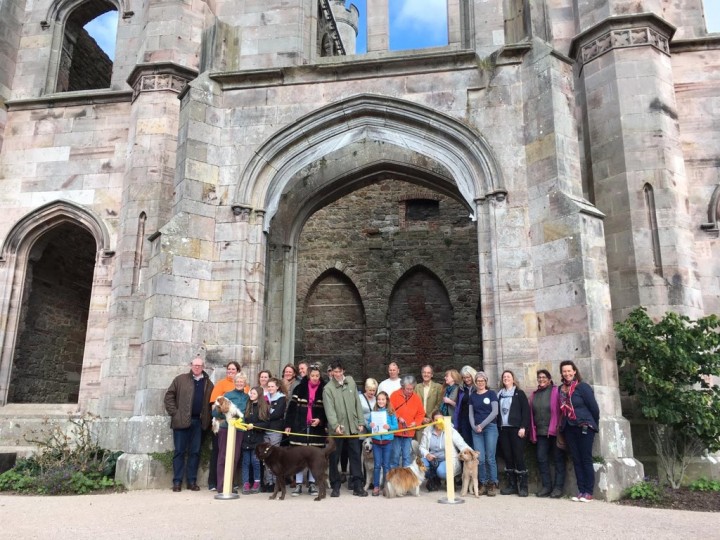 The Famous Tails Trail was launched at Lowther Castle on Saturday by Rory.

There was a good turnout for the launch, with people and dogs coming from far and wide to participate in the inaugural walk. Rory cut the ribbon and went along the trail with other attendees, admiring the flowers and enjoying the scenery. The Castle’s newest walk features the stories of famous dogs, ranging from Bruno to Lassie, and takes the canine and its owner into parts of the gardens that they might otherwise not have seen. The launch took place in the course of the Castle’s two day Dog Market, which was billed as ‘A Jamboree of Wags and Tails’.

Rory then headed to the Sculpture Gallery to deliver a talk on Babur, the Sag-Jangi (“dog of war”) which accompanied him on his walk across Afghanistan in January 2002. He recounted how he had first encountered Babur in a small Afghan village, where he was kept to kill wolves, and how the two of them had braved heavy snows and attacks on their walk to Kabul. The talk ended with a Q&A, during which Rory recounted many of his other adventures with Babur. The proceeds from the ticket sales were given to the Penrith Red Squirrel Group, which promotes the preservation of the animal’s natural habitat within Penrith.

Speaking after the event, Rory said “I was delighted to open the new trail at Lowther and I’m very grateful to its organisers for inviting me. The Castle is one of our area’s foremost attractions and it’s always a real treat to visit, and to see its new trails. It was also a pleasure to speak afterwards on Babur, and to meet so many fellow dog lovers. I’m very much looking forward to returning”.