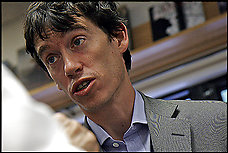 Article first published in The Washington Post by Teresa Wiltz on 9 August 2006.

There really is no good reason why Rory Stewart did it, except that, well, he wanted to do it: something about adventure and the lure of the land, the thrill of putting one foot in front of the other, leaving a trail of footprints behind him. Walking meditation a la the Sufis, etc., etc. Go forth and ruminate.

Humans are hard-wired to walk, and so Stewart, Scotsman/diplomat/author, reasoned that in the walking, perhaps he, a “gibbering ape,” could manage to unlock a spiritual experience of mystical proportions. Perhaps not. But, for nearly two years, walk Stewart did, across Iran, Pakistan, India and Nepal, ending his sojourn with a long and painful trek through the rugged mountains of Afghanistan in early 2002.

In the dead of winter. In the middle of war.

Truth is, for all Stewart’s great expectations, he didn’t feel particularly enlightened as he trudged along in his Berghaus lace-up boots, $10,000 in cash strapped around his waist. (Gore-Tex is all very well and good, but when one is encountering nine-foot snowdrifts, technology can do only so much in the quest for dry feet.) No, he says, most days, he’d start out feeling one with the universe, memorizing snatches of Persian poetry, thinking through philosophical arguments or reading the Bhagavad-Gita, in one hand, walking stick in the other. Within the first hour or two, all would be well. And then the pain would set in, and he’d obsess about his aching knee, his blistering feet, the growling knot in his belly. And the walking meditation would become a walking whine.

Or so he says.

You take the allegations of whining with a hefty chunk of salt because to meet Stewart, the author of “The Places in Between” and “The Prince of the Marshes and Other Occupational Hazards of a Year in Iraq,” is to be exposed to a man well versed in the art of self-effacement. Yet somehow it doesn’t seem like an act, more like a cross between the culture of British self-deprecation and the musings of a 33-year-old man whose confidence has yet to catch up to his accomplishments, a man with an exceedingly large hard drive for a brain.

“I’m just not very good about talking about myself,” says Stewart, who spent a year in Iraq serving as coalition deputy governor of the southern provinces of Amara and Nasiriyah. “I don’t trust myself when I’m talking about my motivations.”

He’s written the It book of the summer, and when he’s introduced to an enthusiastic Monday afternoon crowd at Politics and Prose, he says, “Thank you for this very warm introduction, which I really don’t deserve. . . . I really don’t have much wisdom to impart.”

He’s written a book that haunts the bestseller lists, a book for which critics have heaped on the praises, lauding his “luminous” prose, his nerve and determination and even comparing him to Byron.

Mention this, and Stewart furrows his brow, rakes his hand through chocolate brown hair, murmurs distractedly that, yes, it’s very nice of them to say that, isn’t it?

In his books, he quotes Machiavelli, Cervantes’s “Don Quixote” and from the diary of the Mogul emperor Babur. Ask him which he identifies with most, and he declares, “I amDon Quixote. I’m an absurd anachronistic figure . . . tilting at windmills.”

About those windmills: Underneath the modest demeanor is a man of formidable will. In August 2003, Stewart, a former diplomat who served in Indonesia and Yugoslavia, took a taxi from Jordan to Baghdad and offered to work for the Coalition Provisional Authority because “I thought I could make a difference.” (He was, he said, quickly disabused of that notion by the Iraqis.) Before that, he’d determined that he would walk through Afghanistan, and that meant walk , never mind the war being waged against the Taliban, never mind the jeers of kids who threw rocks at him, never mind Kalashnikov-bearing soldiers who demanded that he stop walking and explain himself. Never mind the dysentery that plagued him, or the numbingly bitter cold and the time he lay down in the snow, briefly giving up as the snow piled on top of him and he drifted off to sleep.

The SUVs, donkeys and horses proffered him were not an option, he says. Walking meant walking, every step of the way. Sometimes he walked solo, sometimes he walked with the toothless fighting mastiff he’d befriended, sometimes with the Afghan military escorts forced upon him by local officials.

The one time he was made to ride in a truck to his destination, he went back the next day and retraced his steps. It was a trip, he says, during which he relied on “the kindness of strangers,” knocking on doors, begging for a place to stay. He offered money, but most refused to take it, even though most were the poorest of the poor. At night he would sit with his sketch pad, drawing the people he encountered (his illustrations are scattered throughout “The Places in Between”).

He saw one woman during his trek across rural Afghanistan, a grandmother he spoke to for four minutes. The others were hidden away.

He was threatened, shoved, punched, treated with contempt, indifference and great kindness (often by warlords with horrible reputations). Sometimes he walked away from an encounter, expecting to be shot in the back. He was acutely aware that he was from a culture and a country that they loathed. Sometimes he slept on the floor belly to belly with snoring Afghan soldiers, other times alone in a bombed-out mosque.

He learned to modify his story to suit the circumstances. He’d claim to be a Brit when that suited. Other times he’d claim to be from Indonesia. (When in doubt, he says, it helps to claim you’re from a Muslim country that people know little about.) Other times, he’d tell people that he was a poet, or a professor of history.

In truth, he says, he was a tourist.

He’s slight of build, with cerulean eyes and dark, mussed hair, whose spikiness is likely to evoke comparisons to the absent-minded professor rather than the fashionable product-aholic. At a taping of “The Kojo Nnamdi Show” at WAMU-FM, Nnamdi marveled at the contrast between Stewart’s forceful dissertation on the state of affairs in Afghanistan and Iraq and his disarming baby face. “He looks like a teenager!”

At Politics and Prose, one septuagenarian exclaimed to another as she headed out the door, “He’s amazing. He’s just what I pictured. I fell in love with him when I read the book.”

He’s the child of a colonial family. His grandfather was stationed in India, and his father worked throughout Asia as a diplomat. Born in Hong Kong, Stewart is an Oxford-educated former military officer and diplomat who, obviously, takes very seriously the role of being a guest in a foreign land.

Colonialism, as he sees it, was a mendacious system: racist, exploitative, horrific. But at the very least, he says, colonialists set out to understand the countries that they took over, prepared to spend years at a time to understand the culture. Today’s “neo-colonialists,” foreign-aid workers and diplomats, parachute into a country, trying to impose Western culture on a people they don’t understand. It is, he argues, a “morally dubious” proposition.

He once supported the invasion and occupation of Iraq.

Now he says, “It’s a catastrophe.”

Today, he lives in Kabul, where he heads up the Turquoise Mountain Foundation, an organization dedicated to restoring historic portions of the city and setting up a school to train Afghan artists.

And one day he’d like to start walking again. This time through Borneo, chasing that which he cannot explain.

He marveled at how all those mystical moments quickly faded once he stopped walking. When he first returned from Afghanistan, he said, friends commented on his stillness, his seeming sense of enlightenment. Ten days later, he said, they were asking, What happened to you? He was back to hanging out in bars and “chasing girls.”

It’s hard to hold on to enlightenment, he says, when you’re pulling down 16- to 18-hour days.

So is he a religious man?

With great reluctance and apparent physical discomfort, Stewart says that he grew up Episcopalian, but . . .

That’s a pretty strong pronouncement for someone who wrote a book filled with spiritual musings, references to rosary beads, a man who seemed to navigate through life with a fairly strong sense of moral certitude.

Stewart’s discomfort increases. He runs his fingers through his spikes and grimaces.

He wrinkles up his face, pauses, then answers as any self-respecting, self-effacing pilgrim would: “I’m probably worse.”