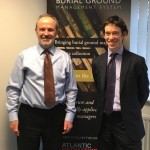 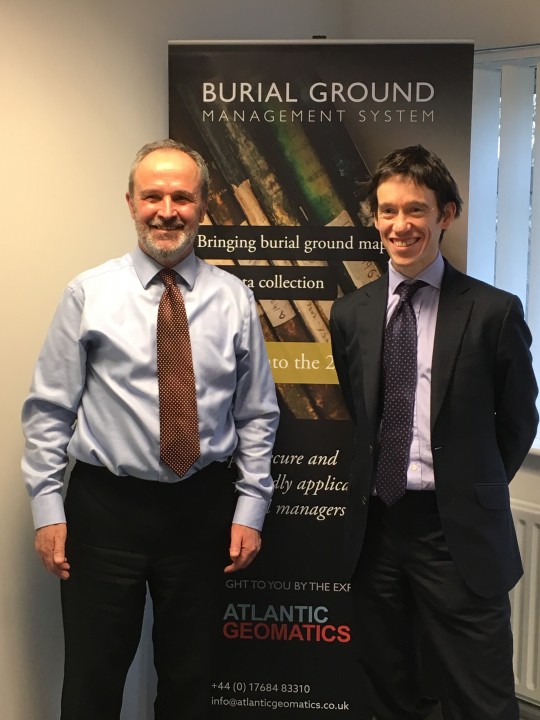 Penrith and The Border MP Rory Stewart paid a visit to Penrith business Atlantic Geomatics on Friday to take a look at an exciting and innovative new project – to map every burial ground in England, and eventually the UK.

Research carried out by Atlantic Geomatics shows that more than 90% of burial grounds in England and Wales do not have an up to date or accurate map, and the project aims to identify the needs of the many organisations with an interest in knowing who is buried where, or whose remains are where, including the Church of England, local authorities, natural burial grounds and local history groups. The project aims to accurately map each grave or memorial and link the information contained in scanned burial registers to photographs. The maps will then enable users to find information easily, and ​they ​will also ​help to protect heritage currently at great risk of being lost, such as weathered memorials or old registers.

Managing Director, Tim Viney said: “There has been much debate in the past few years about a shortage of burial space but no-one, ​not even the Office of National Statistics, ​really knows how much there is and where. With the system we have developed it will be easy to answer questions such as this or even determine how many graves can be re-used after a certain period of time. Furthermore, the project will provide employment opportunities for local people as well as attract volunteer groups and schools from ​across the country. “Atlantic Geomatics, which started out as a traditional surveying and mapping service,​ operates from the Penrith 40 Business Park and currently employs 21 members of staff, but they are looking for more people to join their team as the business continues to grow.

Following the visit Rory Stewart said: “I was thrilled to discover that such a fascinating and technologically advanced project is being developed right here in Penrith, bringing trade to the area and providing new and interesting local jobs. It demonstrates just how rich and diverse our rural economy really is and proves exactly why good broadband infrastructure is essential in order for it to flourish. The vast majority of businesses operating in Cumbria are small or medium sized enterprises (SMEs) such as Atlantic Geomatics, and together they employ over half of all workers in the County. The success of these individual SMEs dictates the strength of our economy, and this increasingly depends on these businesses being able to access reliable, superfast broadband in order to compete with their larger, urban rivals. Ultimately, our economy cannot thrive without good broadband infrastructure, and I will continue to push for 100 per cent coverage with the additional funding the government has made available.” 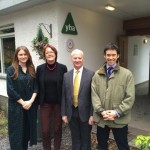 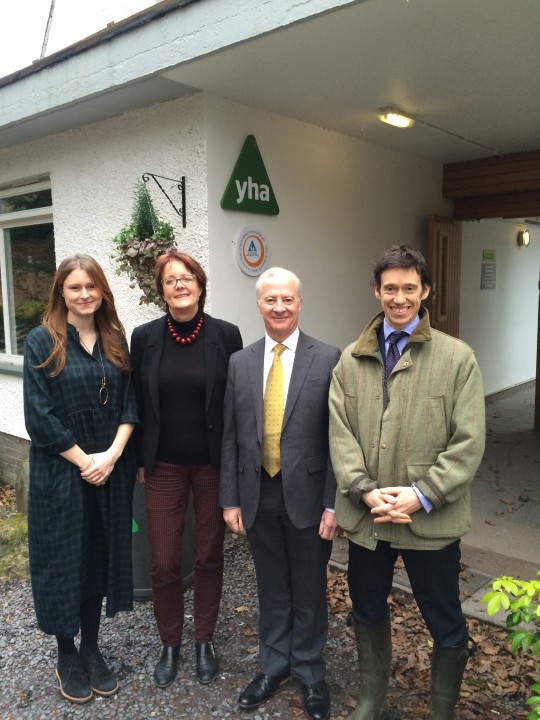 Penrith and The Border MP Rory Stewart visited YHA Patterdale last week to find out how YHA is working to improve the lives of school children across the country. During his visit Rory met with YHA staff and was given a tour of the hostel which was being redecorated ahead of the next busy summer season.

YHA Patterdale is one of 22 Youth Hostels operated by YHA (England and Wales) in Cumbria and one of around 160 properties nationally. It is one of four YHA properties in Rory’s constituency of Penrith and The Border, alongside the Helvellyn, Dufton and Alston Youth Hostels which, combined, accommodatedaround 22,500 overnight stays last year.

Caroline White, Chief Executive of YHA (England and Wales) said: “It was a very positive meeting. Through Rory’s prominence locally and in his capacity as the Minister of State at the Department for International Development, we hope to raise further awareness of YHA and the opportunities we are able to offer young people to start their adventures in travel – domestically and internationally. YHA plays a vital and vibrant role in rural communities like Patterdale where we have Youth Hostels, and why we are committed to continued investment and encouraging more people to stay with us.”

During his visit to YHA Patterdale Rory also found out about YHA’s ‘Breaks for Kids’ fund. Breaks for Kids is a bursary fund that YHA operates to help children from financially disadvantaged backgrounds when they want to take part in a school or community group break away. It offers the chance for children to enjoy some time away, make friends, grow in confidence, increase self- awareness and feel engaged and involved, and teachers and group leaders can apply for up to 50% support for each eligible individual.

Following the visit Rory Stewart said: “YHA Patterdale is an impressive facility in an incredibly beautiful setting and I am very pleased that our constituency has such a wonderful amenity. The investment of YHA is key to engaging with young people, particularly those who might not otherwise have the opportunity to explore the area, and ‘Breaks for Kids’ means that no child should ever have to miss out on a school trip for affordability reasons. I would encourage all schools to take advantage of this fundand the Youth Hostels on our doorstep, as well as those up and down the country.”

For more information on the ‘Breaks for Kids’ fund, or to make an application visit http://www.yha.org.uk/school-trips/breaks-for-kids 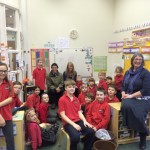 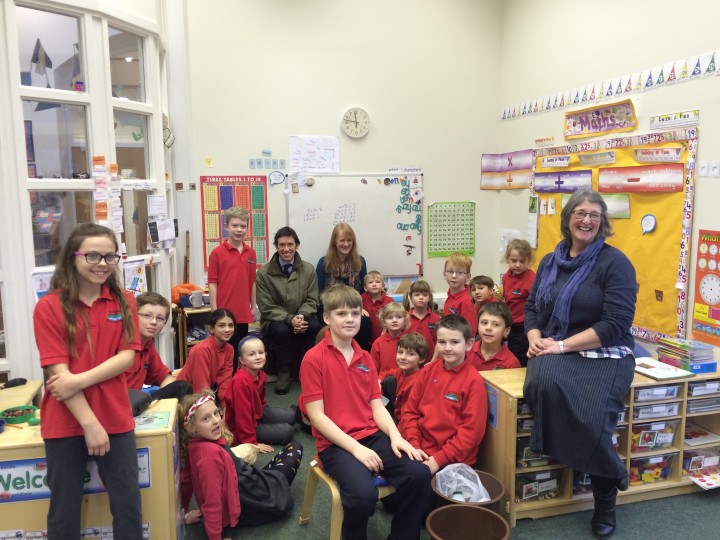 Rory Stewart MP met with children and staff at Patterdale C of E School on Friday, where he was given a tour of the facilities by head teacher Liz Stewart.

The school currently has 29 students and has been rated as ‘good’ by Ofsted. As well as running a nursery and after school clubs for the children, it also houses a ‘community development centre’ and full IT suite, which was obtained with European funding. The centre offers ‘health walks’ in partnership with the local health centre, and also runs adult education classes such as computer training and digital camera courses.

Speaking after the visit Rory said: “It was wonderful to visit Patterdale School on Friday and meet some of the students and their dedicated teachers. The school has amazing facilities and a lovely atmosphere, and I was very pleased to find out all about its role as a local community hub, which makes it an invaluable asset to the rural Ullswater valley.” 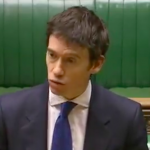 What assessment she has made of the implications of demolitions in the Occupied Palestinian Territories in 2015-16 for her Department’s policies in that region.

The Department’s assessment, in line with long-standing British Government policy, is that demolitions are illegal under international humanitarian law, and that they undermine the credibility and viability of a two-state solution.

The Bedouin village of Umm-al-Hiran remains under threat from a demolition that would cast out 800 villagers, and the number of demolitions in the occupied territories in the first two weeks of January is almost four times greater than the number at this point last year. What support is being given to the people who are being driven out of their homes, and what message is being sent to the Israeli Government that such demolitions are completely unjustifiable?

The hon. Lady raises two important issues, the first of which is long standing. Along with our international partners, we continue to lobby the Israeli Government, who are undertaking the demolitions, to stop doing so, both because they are illegal and because they undermine the two-state solution.

The Under-Secretary of State for Foreign and Commonwealth Affairs, my hon. Friend the Member for Bournemouth East (Mr Ellwood), had a meeting with the Israeli Defence Minister, Mr Lieberman, just before Christmas and raised the issue of demolitions with him directly.

Will the Minister ensure that human rights non-governmental organisations operating on the west bank continue to receive support from the British Government?

We are absolutely focused on supporting NGOs, but above all we are focused on investment in health and education. It is getting the natural capital right, and providing opportunities and hope for the Palestinians, that will lead to security and stability for both sides in the conflict.

Many of the demolitions occur because it is virtually impossible for Palestinians to obtain building permits. What legal support can the Department give to those who are contesting the process?

As I have said, DFID is focusing on health and education, but the Foreign Office has legal support programmes. This issue goes to the heart of the Israeli planning system and involves controversies with the Israeli Attorney General. As my hon. Friend says, it ​is very difficult to obtain planning permission, which is one of the reasons why settlements are built and demolitions then take place.

8. Among the buildings that the Israeli authorities have demolished are community facilities, some of which have been funded and developed with money from the Minister’s Department. I would welcome his statement, but I think that we need action rather than words. Has the time not come to send Mr Netanyahu the bill for the demolition of structures funded by the British taxpayer? [908004]

Will the Minister confirm that DFID, notwithstanding the efforts of a senior Israeli diplomat to “take down” a Minister, will continue to fight against collective punishment, demolitions in the OPTs and the expansion of the illegal settlements?

We are conflating two different issues here. As the Foreign Secretary said yesterday, the Israeli ambassador has already apologised for that incident, and the diplomat concerned has been removed from his post and sent home. I think I have dealt with the overall questions of settlements and demolitions in my answers to the other questions.

I thank the Minister for his responses, but I would like him to be a bit clearer and tell us how DFID has supported those people who are now homeless due to the systematic policy of settlement expansion.

The central story is that DFID is doing three types of things for Palestinian people. First, we are supporting Palestinian state structures, in particular health and education—doctors, teachers and nurses. Secondly, we are working on making sure that we can create a viable economy and employment, particularly through support to small businesses. Thirdly, we invest in human capital; in other words, we invest in making sure that the Palestinian people are educated, healthy and have opportunities for security and stability in the region in the short term. But in the long term there cannot be a two-state solution unless we address the needs of the Palestinian people.

Please note that Rory Stewart, MP for Penrith and The Border, will be holding a drop-in surgery in Penrith’s George Hotel​ as follows:​ Friday 13th January 19.45 – 21.00, George Hotel, Penrith

No appointment is necessary, and all constituents are welcome. More information can be found at www.rorystewart.co.uk/surgeries For more information please call 01768 484 114.