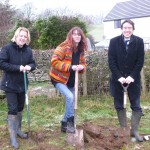 Rory has wished his constituency nominees ‘Good luck’ in the annual awards – nicknamed the ‘Rural Oscars’ – which were devised by the Countryside Alliance eight years ago as a means of celebrating rural communities, skills and enterprise. The awards initiative aims to highlight the diversity of rural enterprise and showcase those who have managed to survive and prosper, against the odds and often in difficult economic conditions.
In contention for a regional title this year are seven businesses local to Penrith and the Border, including: Hadrian’s Country Kitchen, Lanercost Tea Rooms, The Watermill, Longhorns, Eden Foodival, the Llama Karma Cafe, and Swanson House Hotel. Regional judging panels will now oversee the next stage of the competition and decide on the winners. They will be announced in February 2013 before going on to compete with other regional winners at the national awards in Westminster on 13th March 2013.
Rory said: “Penrith and the Border has already produced some fantastic regional winners in the past – such as Crosby Ravensworth’s Butcher’s Arms community pub, and Milburn’s butcher NB Taylor and Sons – and I have no doubt that those nominated this year are as deserving of such recognition. These awards are testament to the incredible hard work that has been put in – and continues to be put in, each day – in maintaining local businesses, which are the backbone of our economy and our constituency. I would like to wish all seven rural enterprises nominated in my constituency the very best of luck. It would be fantastic to see the constituency represented again at the awards ceremony in Westminster, and they all have my full support.”
For more information, please visit www.countryside-alliance.org.uk