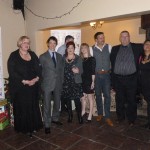 Rory met with local business representatives from Brampton at the town’s Howard Arms Hotel  in an event organised by the Chairman of the Brampton and District Business Association, Alison Cheetham, to launch the town’s ‘Shop Local for Christmas’ campaign. Rory met and chatted with local business people at the event, which was hosted by the new landlords of the Howard Arms hotel and catered using local suppliers and Cumbrian ingredients, some from Alison’s own business on Front Street, Half Moon Wholefoods.

Rory said: “Brampton boasts an incredibly strong and vibrant business community, and it’s wonderful to see so many representatives here tonight flying the flag for its local shops, producers and businesses. From care home managers to agricultural suppliers to wholefoods retailers to newsagents, there is an impressively broad range of businesses that are represented by the Association, who are doing a fantastic job of promoting the advantages of local shopping, not just at Christmas but all year round. As ever, I am struck by how self-reliant and enterprising Brampton is, and I wish everyone a very successful trading period this Christmas.”

Chairman of the BDBA, Alison Cheetham, said: “We were very pleased to be able to host our MP at the start of our shop local campaign. We’ve picked on four good reasons why Brampton is good for your Christmas shopping: you can find most everything you need from Christmas fayre to stocking fillers; you can find a great amount of local produce; there’s free parking; and you’ll always be assured of a personal service.”
“As part of the campaign, the Association’s environmentally-friendly Brampton Bags will again be on sale. The bags first appeared in 2008 subsidised by Sustainable Brampton and the Brampton Chamber of Trade. They are being sold at the same price, £1.50, and will be available in a number of shops around town. Some shops have also indicated they will be opening on the last three Sundays before Christmas, and the Business Association is also supporting Sustainable Brampton’s Christmas Farmers’ Market on Saturday 17th December.”

The Brampton and District Business Association evolved in 2010 from the Brampton Chamber of Trade and has a membership ranging from town centre shops to businesses outside of town as far afield as Warwick Mill. The Association also organises the annual Brampton Festival market held every June/July. 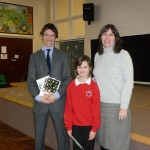 Rory picked his winning Christmas card from dozens of entries sent to the local MP from schools across the constituency. The design by winner 9-year-old Danielle Rome from Year 5 at Brampton Primary School caught the MP’s eye because of its colourful depiction of a Cumbrian night sky, with yellow stars painted against a dark backdrop above a cottage roof with Father Christmas climbing down the chimney. The local MP presented Danielle with her prize of £50 of book vouchers from Penrith’s Wordsworth Bookshop to proud applause from the assembled school and parents.

Rory said: “As with last year’s competition, the standard was incredibly high and it was very, very difficult to choose an outright winner. I received some incredible entries from all over the constituency, all the way from Blackford to Kirkby Stephen to Wigton. In the end I felt that Danielle’s design was simple and striking and very beautifully painted, and I am delighted that she is this year’s deserving winner.” 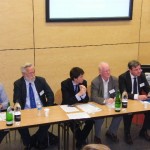 submission to the boundary commission for england

Rory’s submission of today to the Boundary Commission for England’s ongoing consultation into their proposed boundary changes to the county of Cumbria appears below:

But I have major reservations about the other four proposed seats for Cumbria (Barrow-in-Furness CC, Copeland and Windermere CC, Kendal and Penrith CC, Workington and Keswick CC).

The proposed boundaries for these seats ignore the topography, geology, history and economy of Cumbria.

Topographical logic divides Cumbria into three zones: the West Cumbrian coast, Cumberland, and Westmorland, with Scafell in the middle. Wordsworth compared the geography of the lakes to a wheel: Scafell is the hub from which stretch valleys and watersheds in every direction like spokes.

The Commission’s proposed seats break these natural boundaries. They combine Morecambe Bay on the edge of Lancashire with Nenthead high in the Pennines on the Northumbrian border. They combine Whitehaven with Windermere over the Hardknott Pass.

The geology of Cumbria also reflects these natural boundaries. The West Coast is defined by its carboniferous areas from which coal was extracted around the edge of the sandstone. In the east, iron ore was extracted from the edge of the limestone. The Windermere ridge (which cuts the proposed Copeland and Windermere CC in half) defines the Lakeland valleys and their upland farms. The Cumberland plain, towards Wampool, has the rich soil which forms the great milk field of England, defined by a sandstone landscape that stretches from the Eden valley to the Solway Plain.

The geology of Cumbria has oriented the history and socio-economic divisions of Cumbria. Traditional Cumbrian livelihoods have depended upon these geological differences: upon what Cumbrians planted in the earth or extracted from the ground. The West Coast has been an industrial area from a very early period: it produced coal, it had potteries, it made glass, it built ships. Maryport, Egremont, Whitehaven, and Workington look to the Atlantic. The coast has more in common with Scotland than the Lakeland fells: Kirkcudbright is closer than Keswick.

This industrial legacy means that West Cumbria faces specific challenges: social deprivation, unemployment, urban regeneration, low inward migration, low life expectancy. The contrast between West and East is dramatic. In the East, there is no unemployment problem. Instead, the challenges are connected with isolation, agriculture, and affordable housing.

What is more, many of these problems are under-represented in Westminster: whether it is the nuclear industry in the West or upland farming in the East. By combining Workington with Ullswater or Whitehaven with Windermere –as the Commission proposes to do – the Commission would leave Cumbrians with a much reduced voice in Westminster for these important issues.

I urge the Commission to recommend instead one urban-based West Coast seat serving the homogenous industrial areas of Whitehaven, Workington, Egremont and Maryport; a Barrow seat with its rural hinterland restored; and two rural constituencies to represent the unique Cumbrian interests connected with sparse populations: Westmorland and Lonsdale and Penrith and Solway.

This alternative proposal – which mirrors counter-proposals made by many Cumbrians and the three main political parties – would take account of Cumbrian geography, history and economy and give Cumbrians a stronger voice in Parliament.” 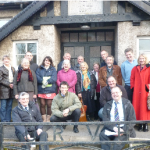 Rory is actively encouraging businesses which attract visitors to the North Pennines and help boost the local economy in a sustainable way to take advantage of grants being offered by the North Pennines AONB Partnership to help finance their ideas. Businesses involved in sustainable tourism are particularly encouraged to apply, working on projects that might range from providing drying facilities to walkers, or a secure store for cycles at accommodation, to more unusual ideas linked to natural beauty and helping people to enjoy it.

Rory said: “AONB North Pennines’ grants are a great boost to help local thinkers get their innovative ideas off the ground, contributing to the already impressive number of small businesses operating in the area. These are businesses which form the foundation of our tourism sector, which itself underpins the economy of our corner of north Cumbria. This is a fund from DEFRA which aims to enable people to live sustainably in their communities, and to ensure that our landscape continues to be protected by businesses that are manageable and proportionate to our area. All individuals, community groups, parish councils, charities and businesses in the area are strongly encouraged to find out more about the fund by visiting www.northpennines.org.uk or emailing [email protected] before December 15th 2011.”

The closing date for applications is Thursday 15 December 2011 and it is intended that decisions will be made by end of December. The grants will be up to a maximum value of £500 each with a minimum of a 50 per cent match from the applicant, to be spent before mid-February 2012. 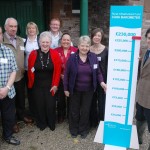 Rory attended the Eden Community Conference at Skelton’s Toppin Memorial Hall on Saturday 26th November, meeting with representatives of Eden communities who had gathered for the day-long event to officially launch the £230,000 Eden Rural Infrastructure Fund, which will dispense grants to communities who have exciting projects aimed at making their villages more sustainable. Local groups learnt how to bid for funding, and met with EDC Councillors and officers to discuss their ideas.

Rory, who has championed the work of Penrith and the Border’s community groups as a blueprint for other parts of the UK, said: “I am delighted to be supporting the launch of Eden’s Rural Infrastructure Fund. Eden has been in the national spotlight for its Big Society initiatives, and it is absolutely wonderful that our local council is building on this success and recognising that local communities know more, care more and can do more than distant government. We are elected here to listen to you, and not vice versa, and finally there is a long overdue recognition that communities’ decision-making is the most legitimate, and often the most innovative. It is wonderful to see such a lot of both familiar and new faces, showing that villages have a very powerful voice.”

Eden District Council’s Deputy Leader and Community Services Portfolio Holder, Councillor Mary Robinson, said: “Community and voluntary groups from all over the District were invited to Skelton to attend the Community Conference. We wanted to hear their ideas about how they can use the Eden Rural Infrastructure Fund to kick-start projects in outlying areas of the District to make Eden more sustainable. We had an interesting programme of activities on the day that should help stimulate people’s imaginations to come forward with project ideas! These include talks by representatives from community groups who have already made a big impact in their areas, from community trusts running the local pub and building affordable homes, to a ‘distinctiveness group’ promoting the individuality of their area to attract tourists. The conference is all about sharing ideas and knowledge to improve and sustain our rural areas for the long-term.”

The key elements of the Community Conference were:

– Launch of the £230,000 Eden Rural Infrastructure Fund
– Communities being able to discuss and put forward projects
– Hearing about successful community projects in Eden 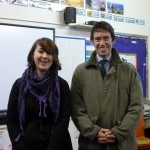 Rory has nominated local Wigton schoolgirl Sally Robinson for a national ‘V-inspired Award’, which recognises the fantastic achievements of young volunteers aged between 16 and 25 from across the UK. Rory nominated Sally, who is 17 years old, as an “exceptional and inspirational” young volunteer. Sally took part in the pilot National Citizen Service earlier this year, where she developed her confidence and leadership skills, but has also been extremely active in the local community providing maths tutoring for pupils in the lower years of Nelson Thomlinson School, taking part in a paired reading scheme twice a week, providing classroom support in music lessons each week, and regularly giving concerts as a member of the school band to raise money for local charities.

Rory said: “Sally is an inspiration to other young people, and has been extremely busy helping those less fortunate or able than her in addition to studying for her own A-levels. We know there are a huge number of young volunteers making a real difference to their communities and I want to make sure they get the recognition they deserve. Not only that, but Sally’s achievements are another symbol of Wigton’s great community strengths, and I am very proud to be nominating her, and wish her all the very best of luck.”

The V-inspired Awards ceremony will be held in March next year, the biggest national event of its kind celebrating youth volunteering. In previous years the awards have been backed by all three major political party leaders, and HRH Prince William.